Unfortunately, we are off the trail.   I wasn't feeling quite right as we were about 30 miles into a 125 mile backpack of the Bob Marshall Wilderness (or as locals refer to it - the "Bob"), so we hiked back out and returned home.  I am hoping that all that is needed is an adjustment of my thyroid medication and that we will be back at it shortly.  It is frustrating because the season is starting to slip away and we have lots of ground to cover in MT.  Ugh!

In tackling the trail through MT, we decided to start hiking from the north and work our way south.  So, before getting derailed in the Bob we had hiked through Glacier National Park (GNP).  What a beautiful place!  It deserves national park recognition.

Weather:   Our first day and a half of hiking in GNP was spent in ceaseless rain.  A ranger told us the day before we set out that the weather prediction was 100% chance of precipitation.   Wow - I have never heard a meteorologist predict 100%!  He was spot on.  After the soaker, the weather while hiking through GNP and the Bob was a mixture of sunny, clear and warm mixed with afternoon thunderstorms.

Impressions:
Glacier National Park:
*  Because of the glacial activity in the park the CDNST follows this pattern - hike through a wide valley of meadows, rivers and lakes surrounded by prominent mountains, climb above tree line (usually past amazing waterfalls),  and end with climbing over a rocky treeless pass with incredible vistas.  Then repeat.
*  The views were quite stunning.
*  We were surprised how lush the foliage was at the lower elevations.  Large broad-leafed plants, ferns and grasses had taken over the trails on the less traveled meadows and forested areas of the park.  Our pants and shoes were drenched after walking on these trails after it rained.
*  The alpine zone begins around 7,000 feet.  This is quite different from Colorado where the tree line ranges between 11,200 to 12,000 feet.
*  It is believed that the glaciers will be gone around 2020 due to climate change.
*  Despite all of the warnings about grizzly bears, we only saw one while we were in the park.  We saw him as we were driving down the road.
*  We appreciated the bridges the park had placed over the rivers.  Many of these are installed and removed each season.
*  The backcountry campsites are quite civilized!  There are logs to sit on, level spots for tents, poles or storage boxes to keep food from the bears and..... wait for it......even pit toilets!
*  We were in the park during the peak two weeks of its short tourist season.  This created a challenge in obtaining car camping and backcountry sites.  Car campers are only allowed to sleep in park campgrounds and backpackers are required to obtain a permit to sleep in designated backcountry campsites as described above.  To add to our traveling difficulties, the east side of the park adjoins the Blackfeet Indian Reservation.  To camp or hike in the Reservation you have to obtain permission from the Blackfeet.  With the exception of Yellowstone NP, we are accustomed to pulling into the forest, car camping pretty much anywhere, hiking until we feel like stopping and setting up our tent wherever we choose in the backcountry.  This doesn't work in GNP.

Bob Marshall Wilderness:
*  The Bob is an area where you car camp pretty much wherever you like and start walking.  No permits are required and you are not forced to sleep in designated camp sites.
*  Okay, so you can't sleep anywhere.  A helpful employee at the local National Forest Service office told us that we couldn't camp along a couple mile stretch of the trail because they had blown up a horse carcass that a bear had been aggressively protecting.   She said this as if it is a common occurrence to blow up dead horses!  All we could think of was the quote from the 1981 movie, Stripes, where a general asks the Bill Murray character where his drill sergeant is and Bill Murray responds "Blooooown Up. Sir!".   As we were hiking along the trail, we also discovered another no-camping section where they had blown up a mule carcass.  Who knew!
*  Because of the Red Shale Fire there was a 40 mile section of the CDNST the was inaccessible and required a reroute over some other trails.
*  Things didn't go sideways in the Bob until we had past the Chinese Wall.  The Chinese Wall is oft-mentioned highlight of the trail.  It was worth seeing - it is a dramatic 1,000 foot high, 13-mile long escarpment the seems to appear out of nowhere.

Coming up:
We aren't sure.  We hope to be back on the trail shortly. 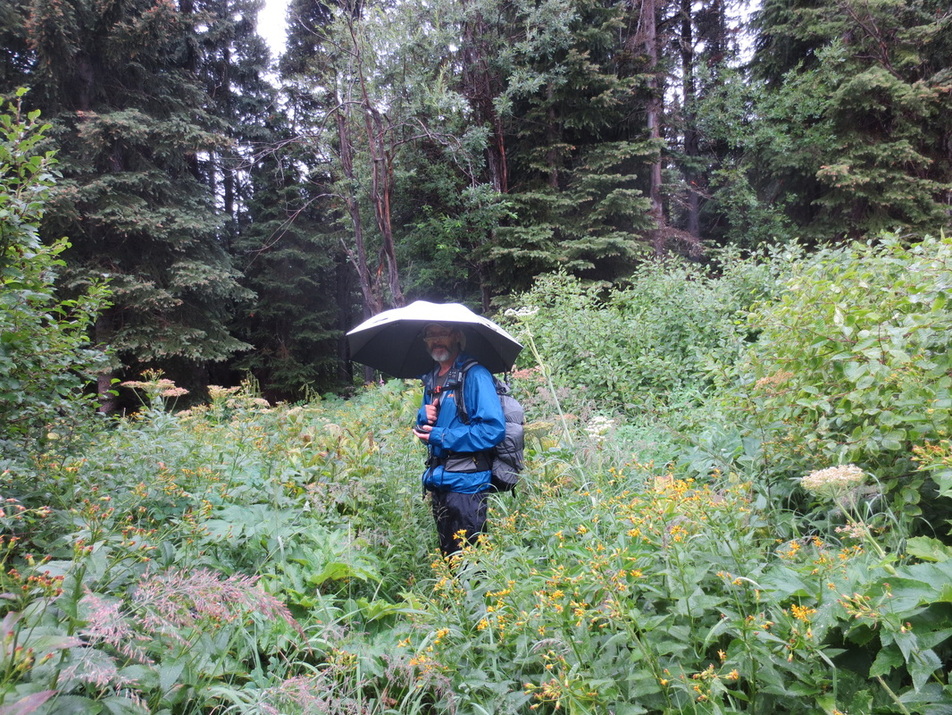 Mike finding our way on a rain soaked, overgrown trail in GNP 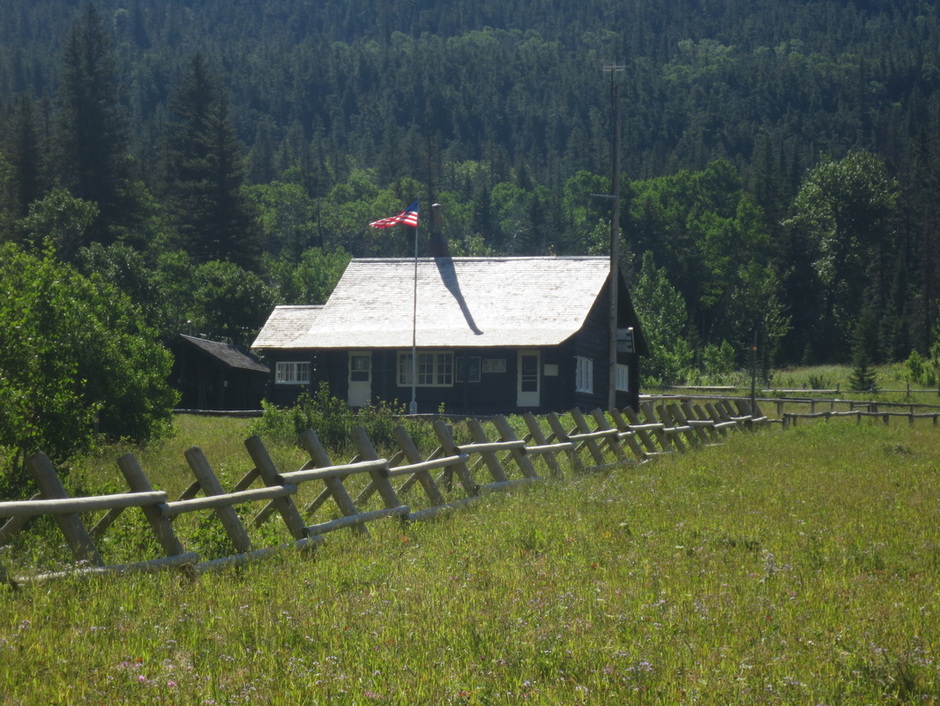 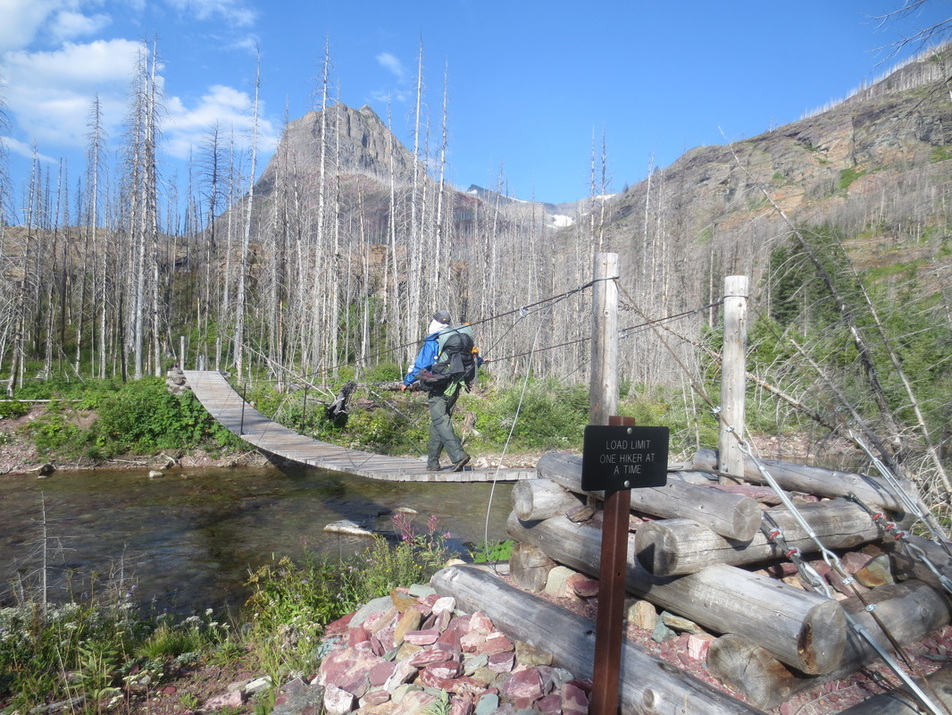 One of several suspension bridges we crossed 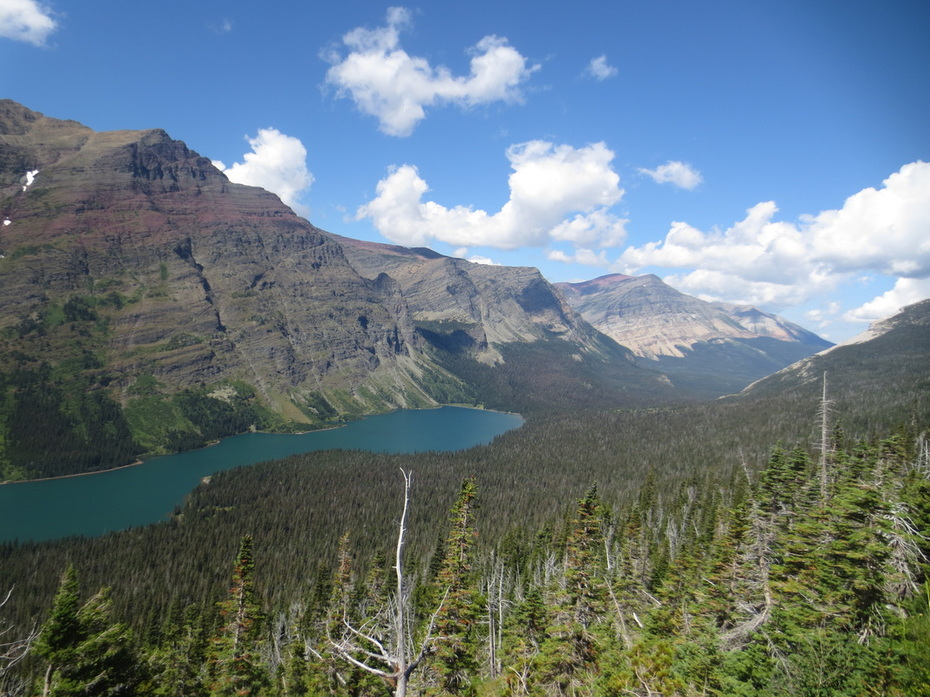 View of Elizabeth Lake as we climbed up to Ptarmagan Tunnel 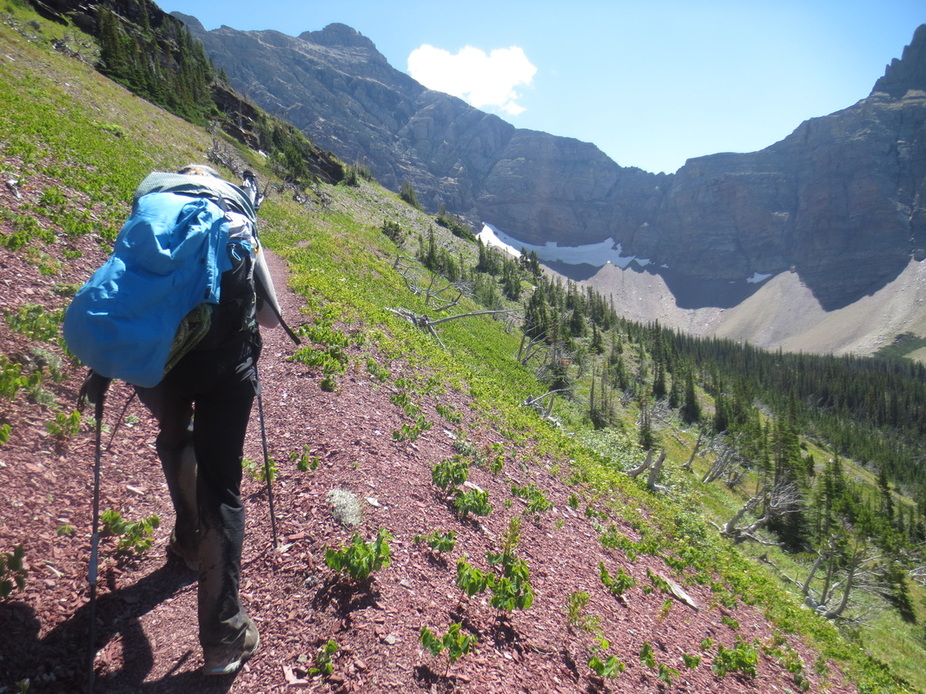 Approaching the Ptarmagan Tunnel. Note the horizontal line across the rock in the center of the picture. 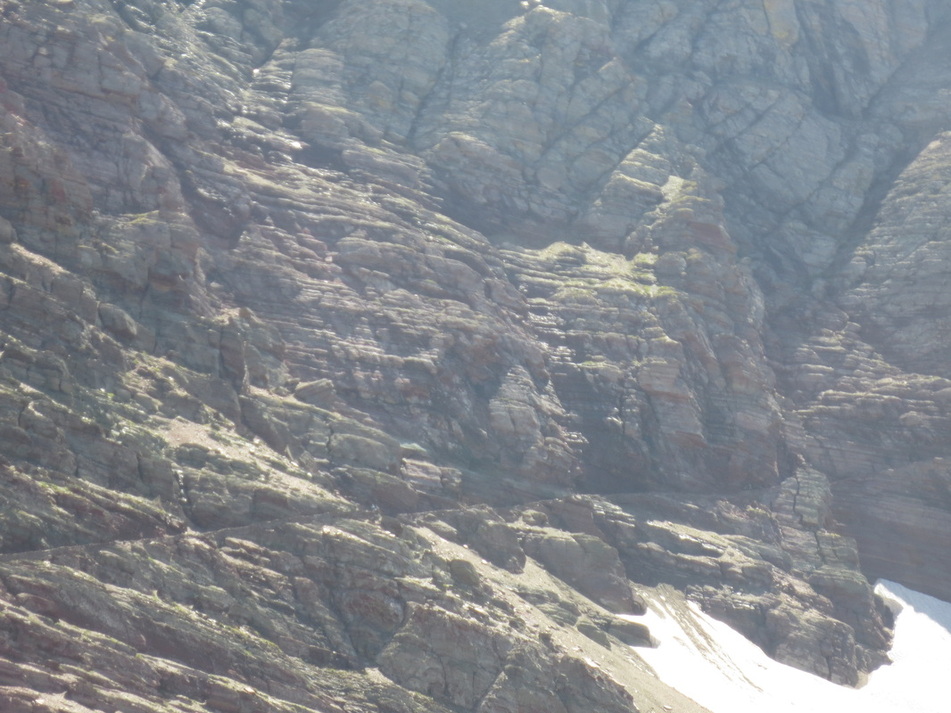 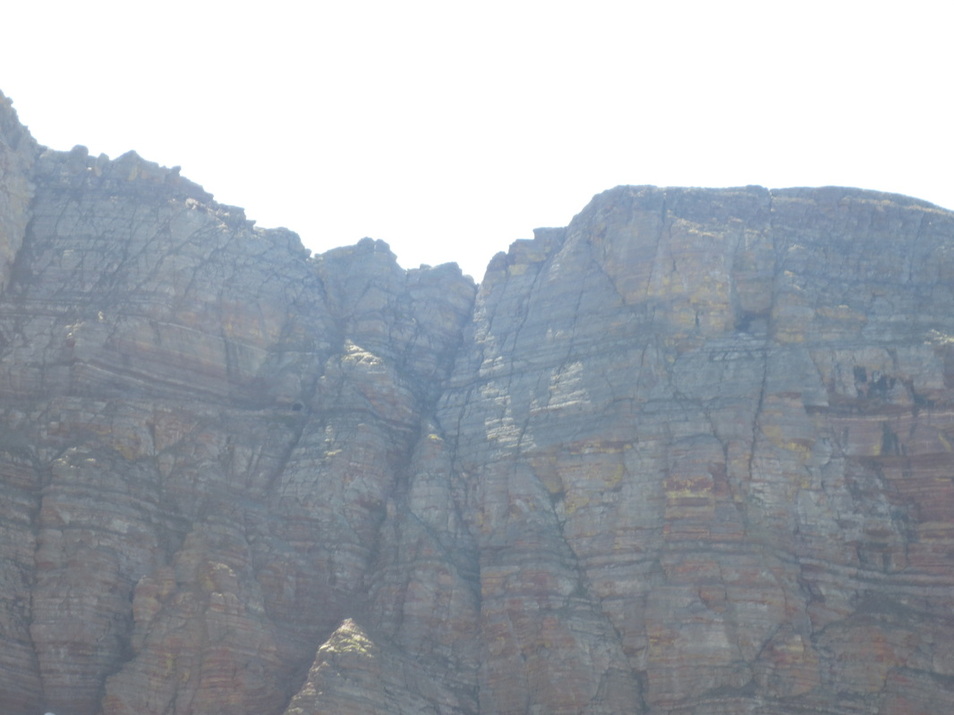 Note the small hole near the middle of the picture. That is the tunnel they blasted through the mountain in 1930 so horses with packs could pass through 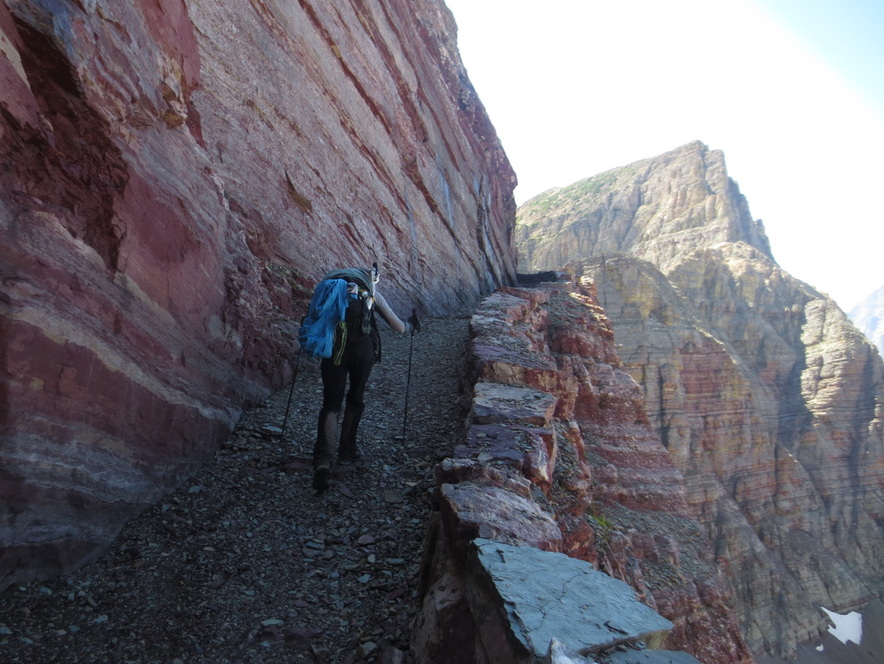 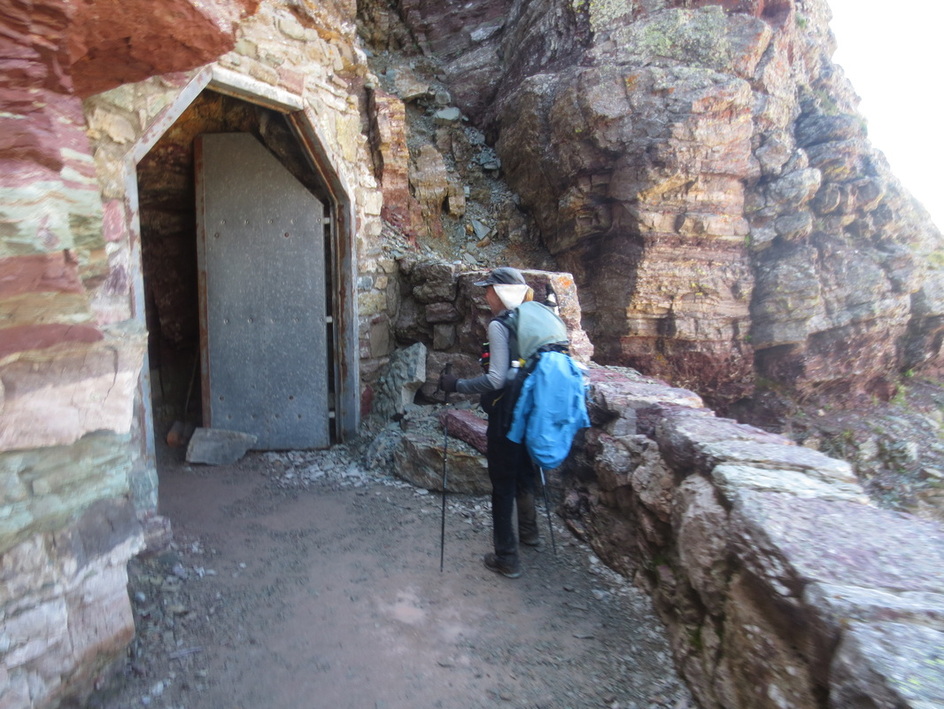 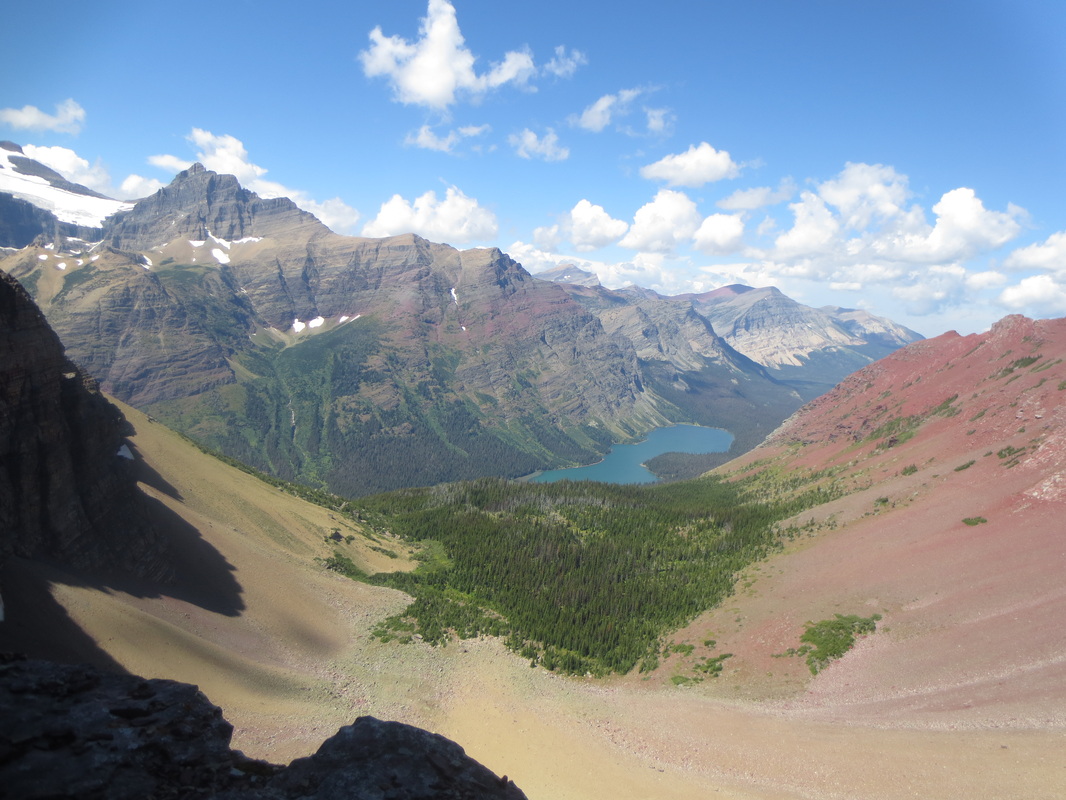 View from the door at the north side of the tunnel 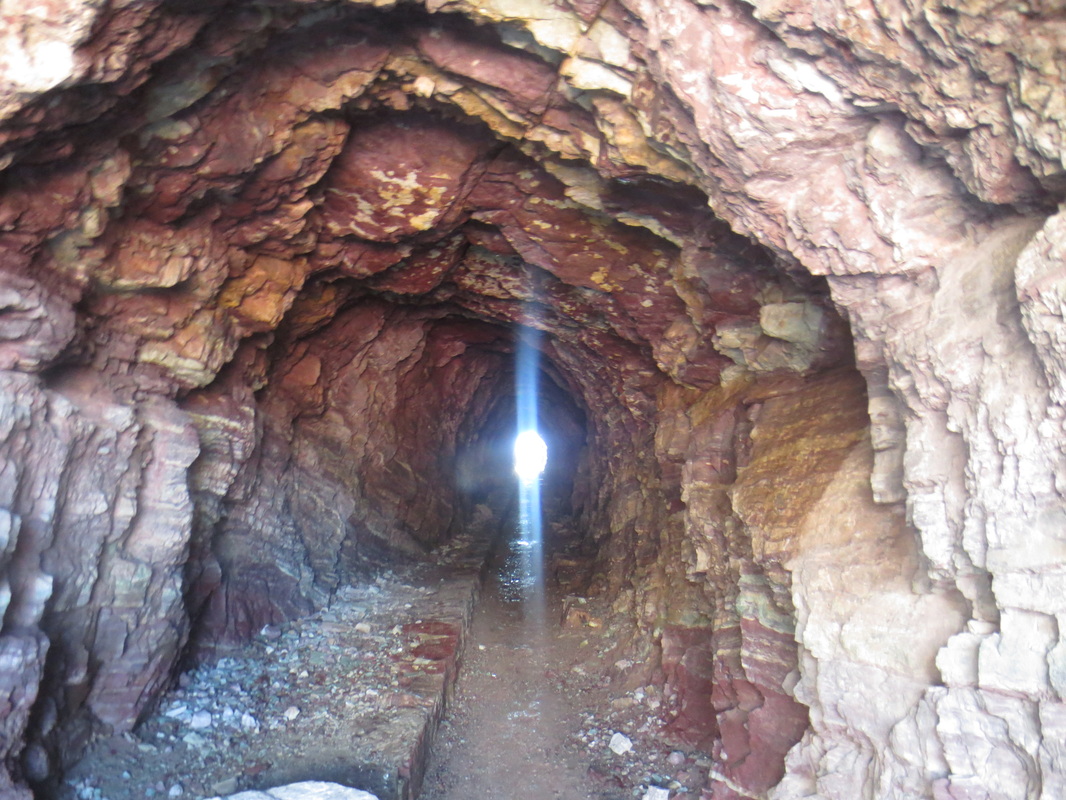 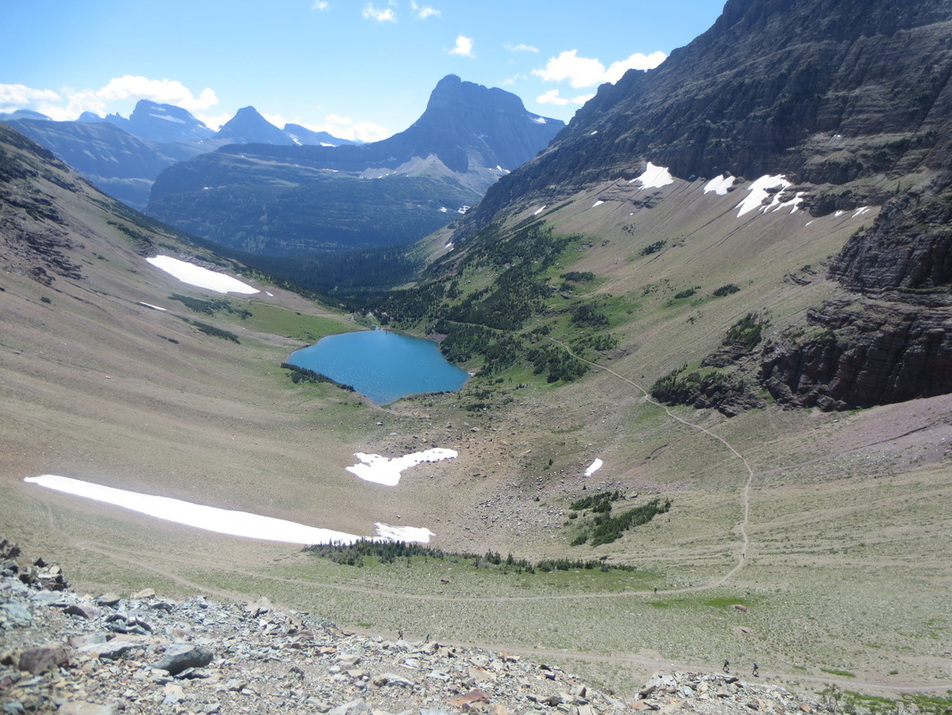 View from door on south side of the tunnel 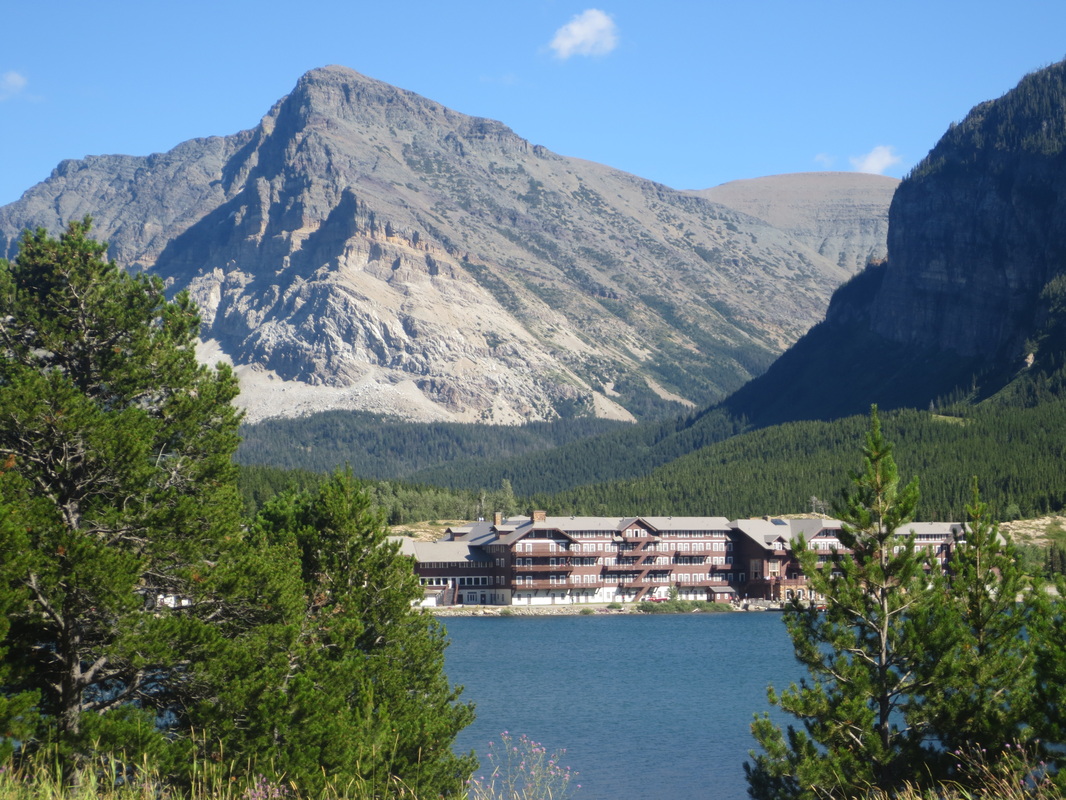 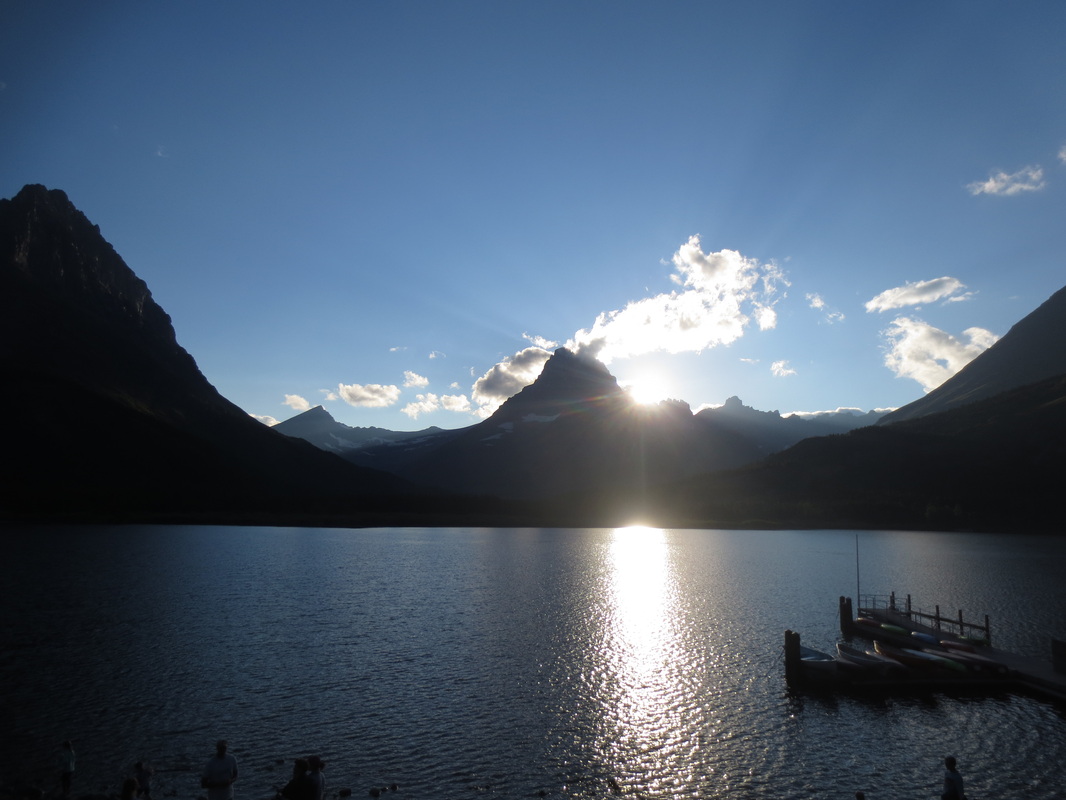 View at sunset from Many Glacier Lodge 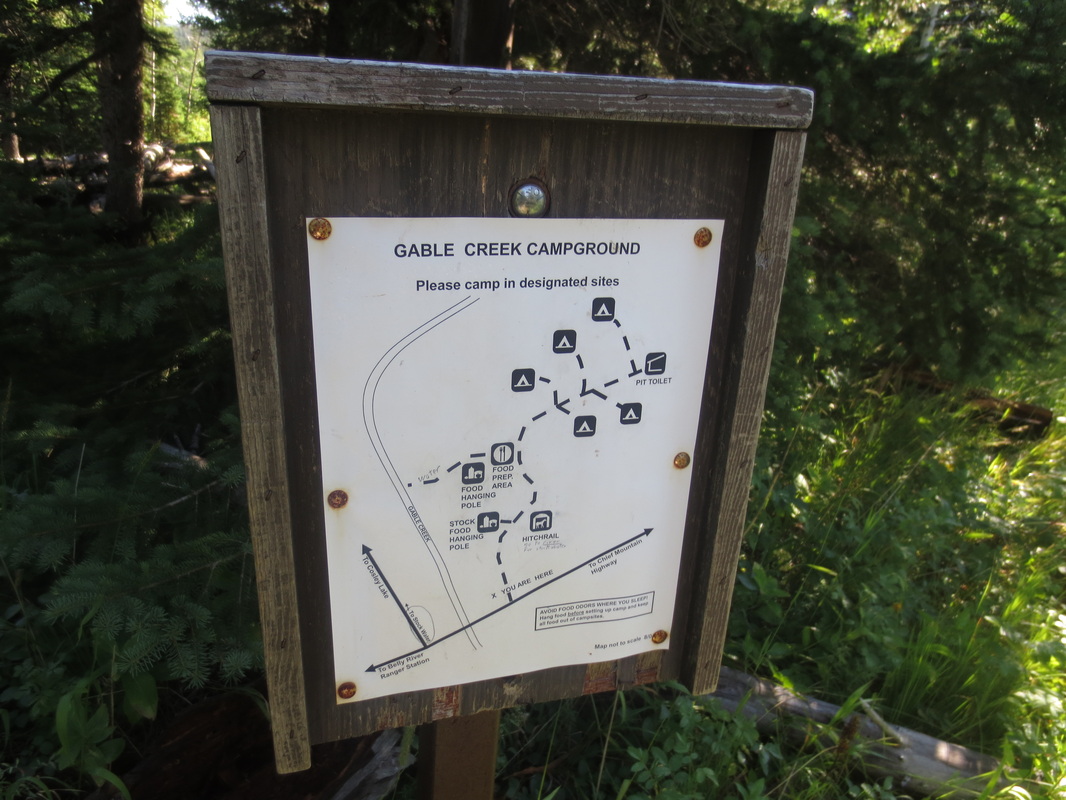 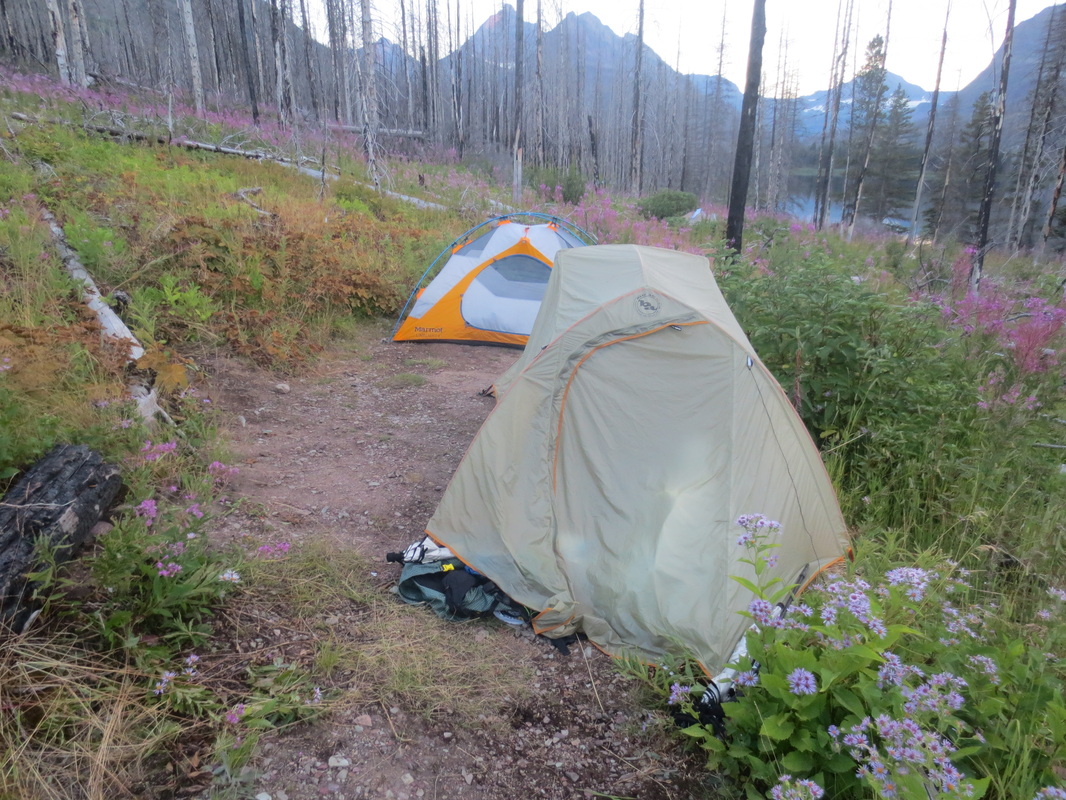 Our backcountry campsite at Red Eagle Lake. We shared this site with another woman who wanted company because she was concerned with grizzly bears. 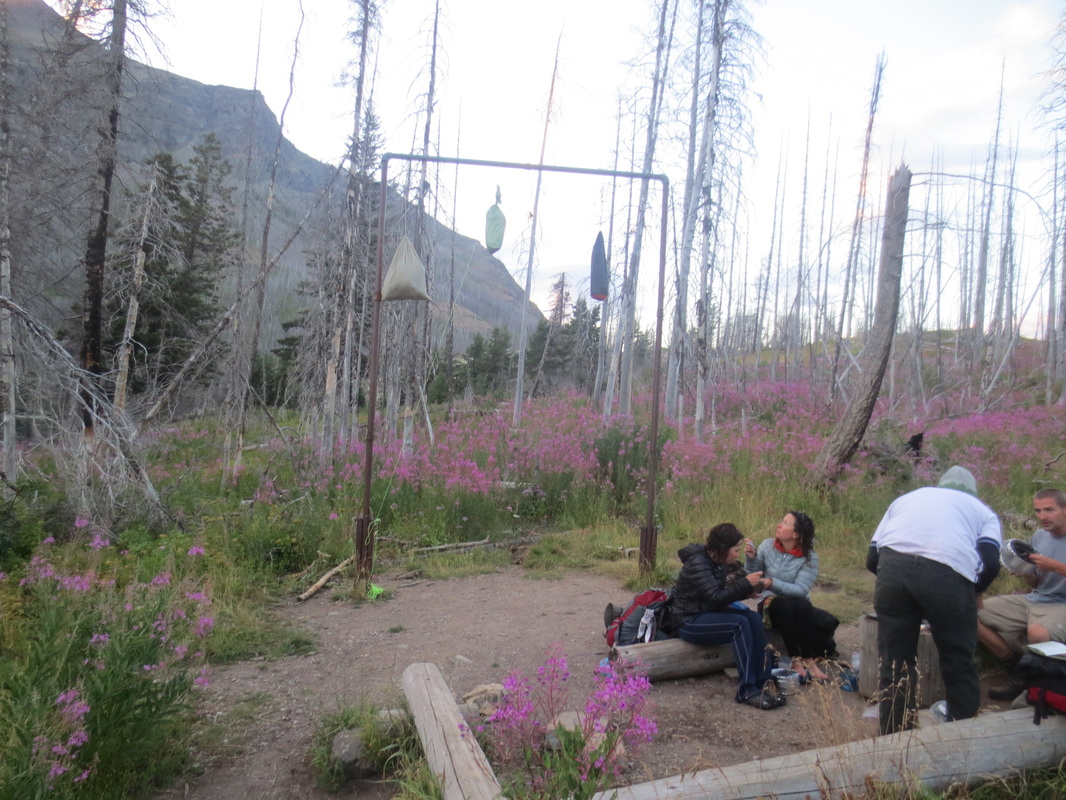 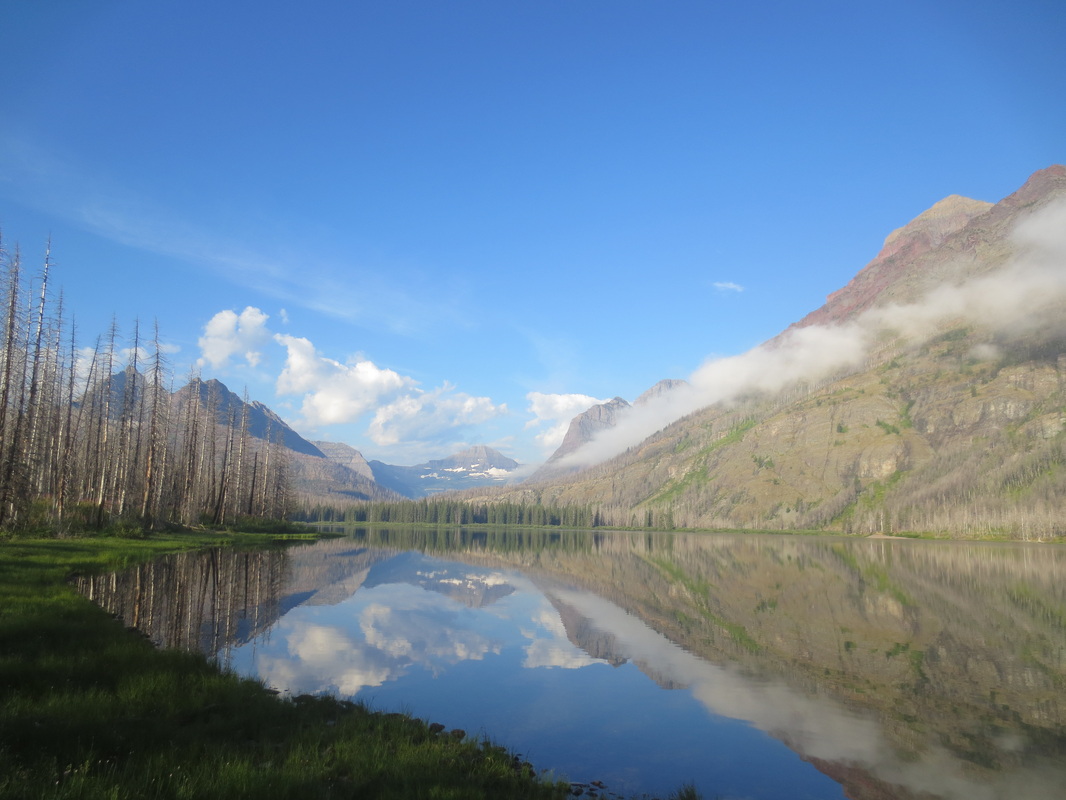 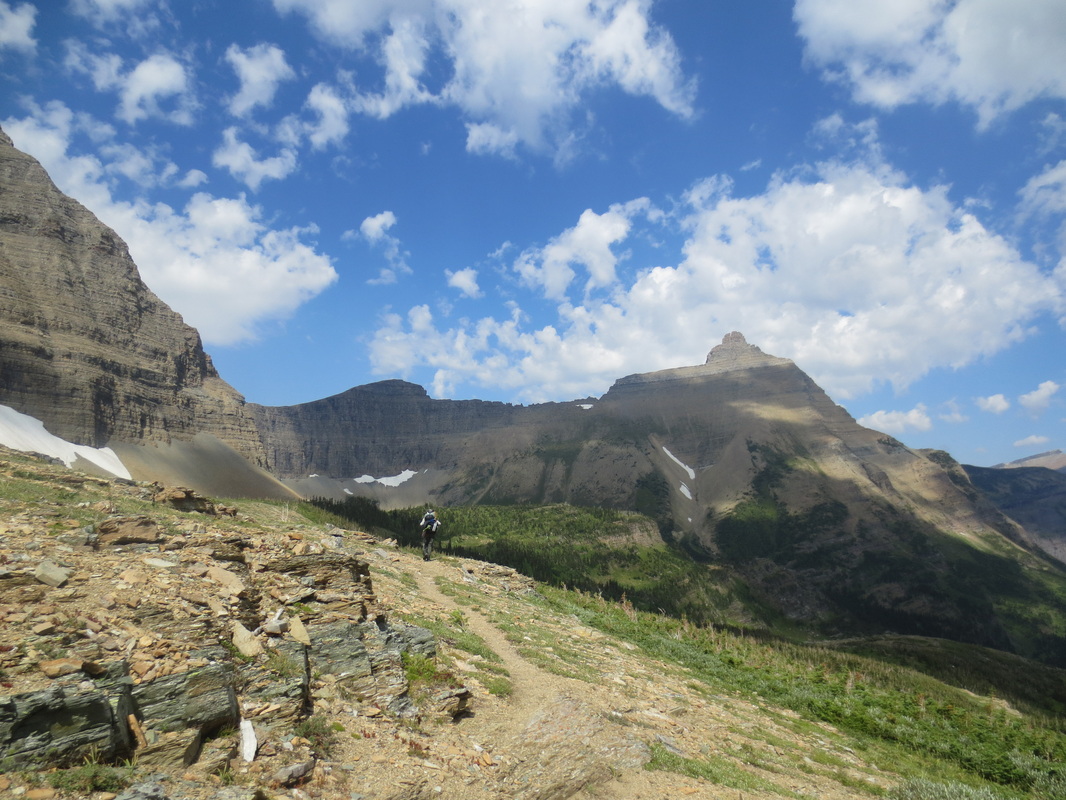 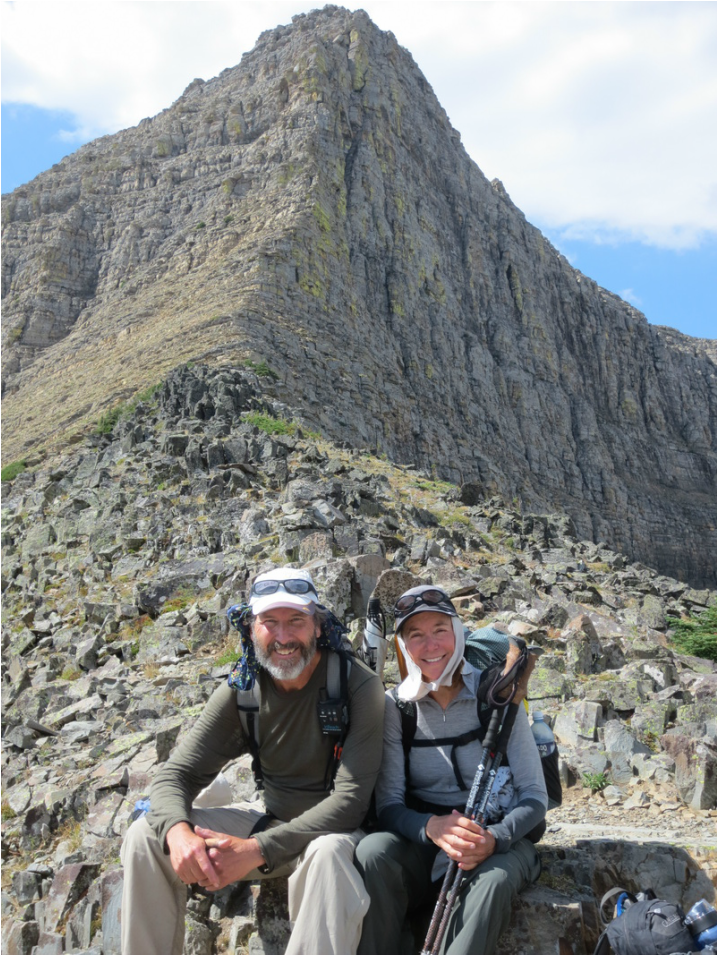 Triple Divide Peak behind us. Waters from this peak flow to the Pacific Ocean, Hudson Bay and Gulf of Mexico watersheds 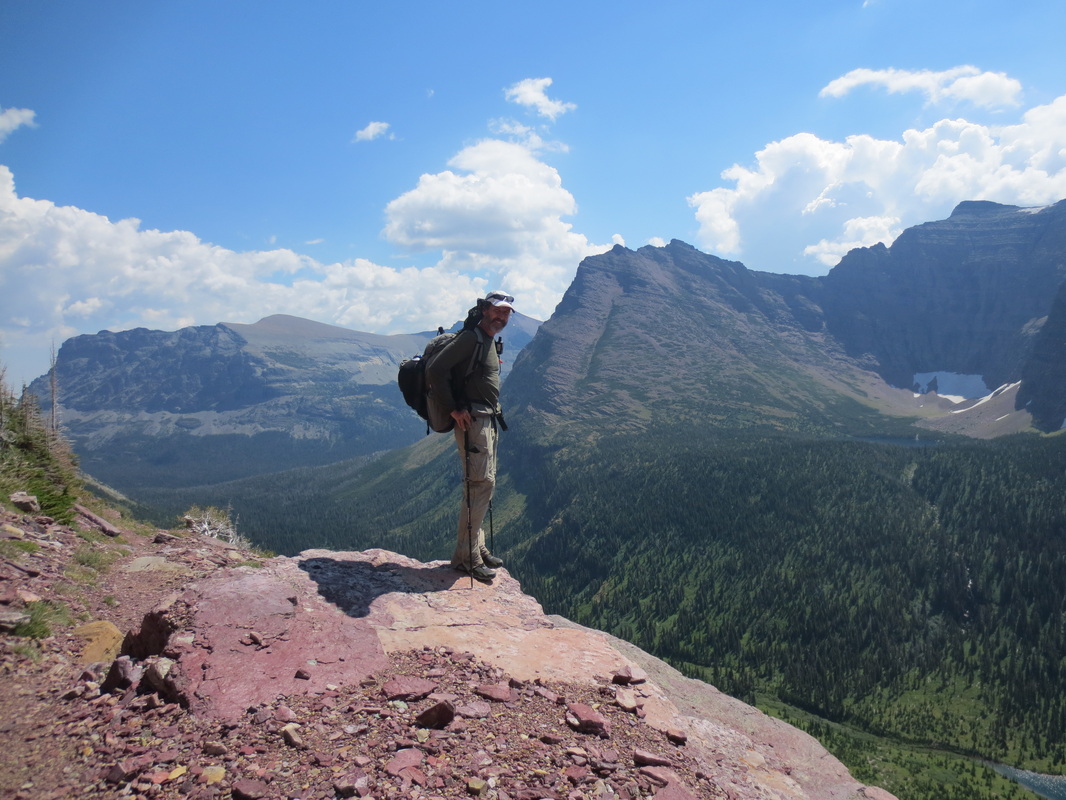 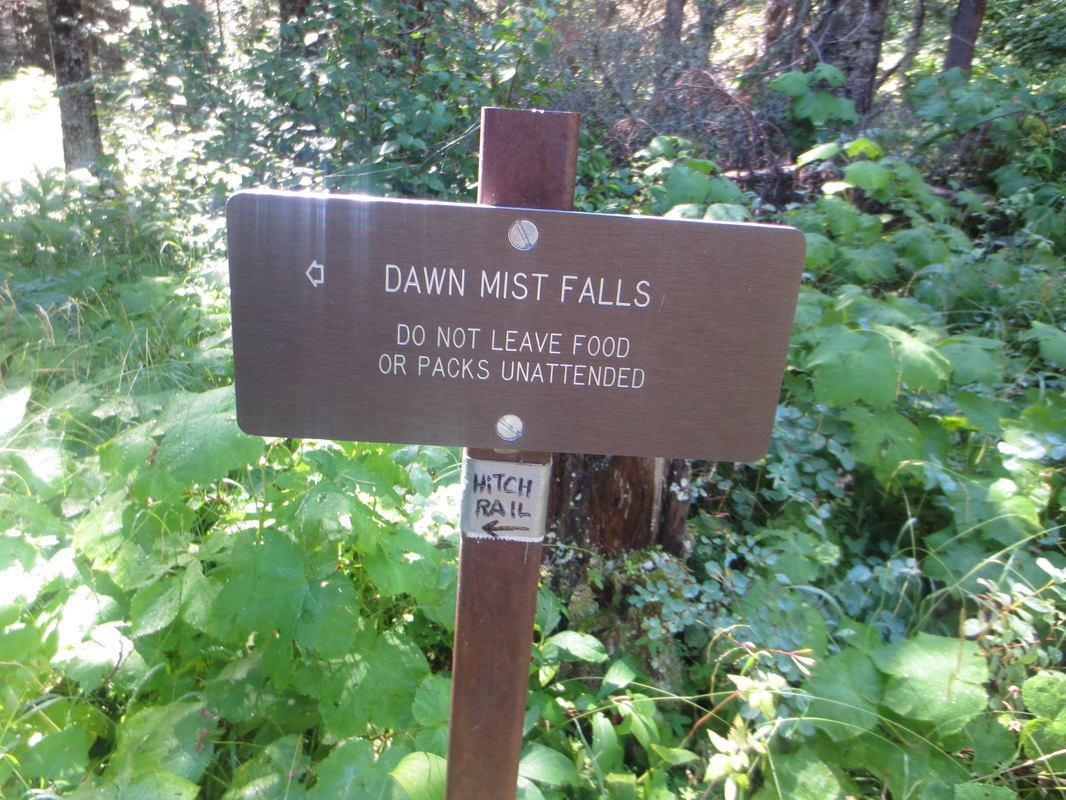 The bears must be watching! 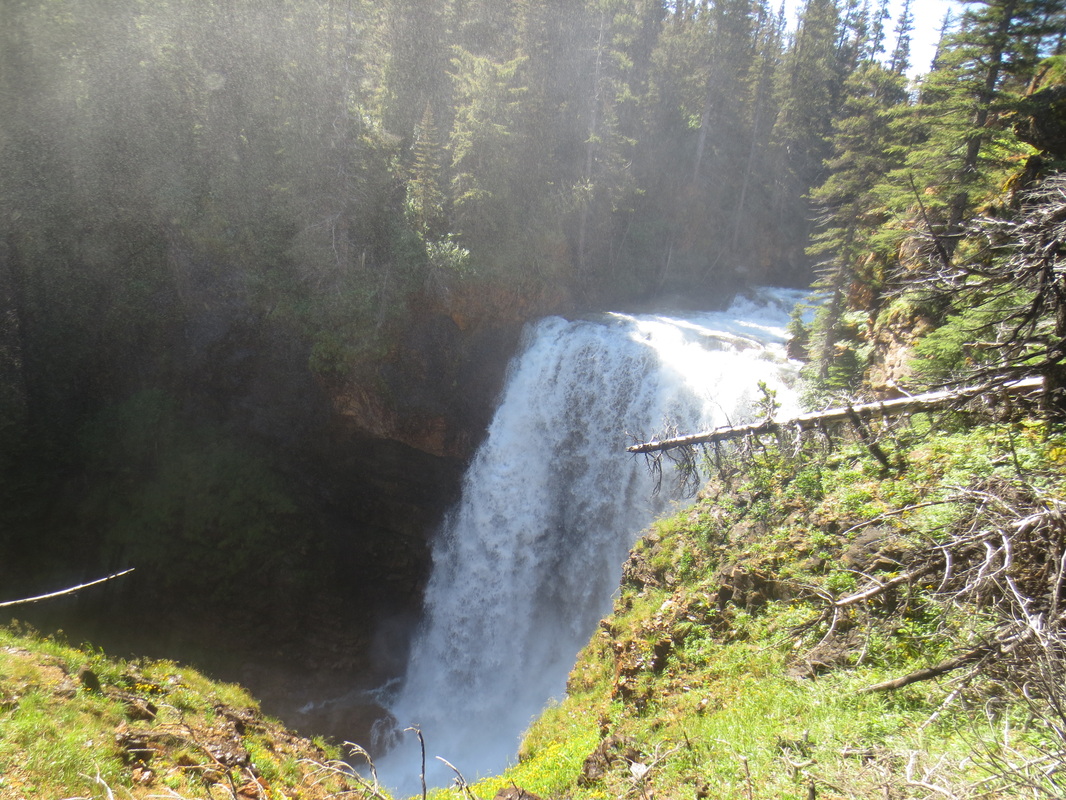 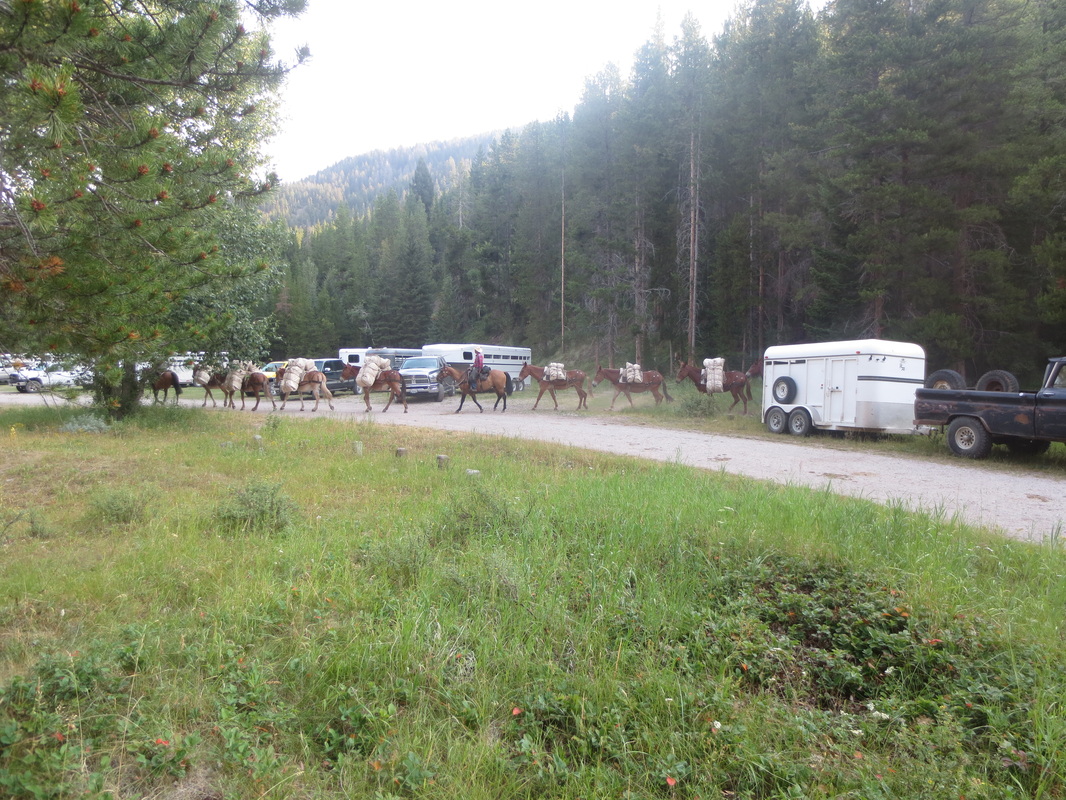 Packers heading into the Bob to set up camp 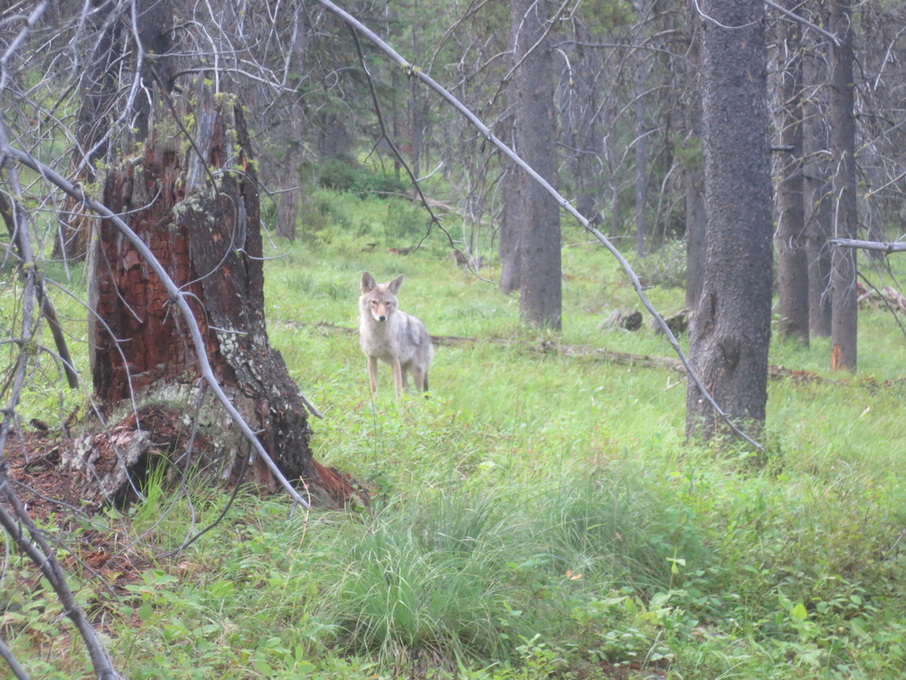 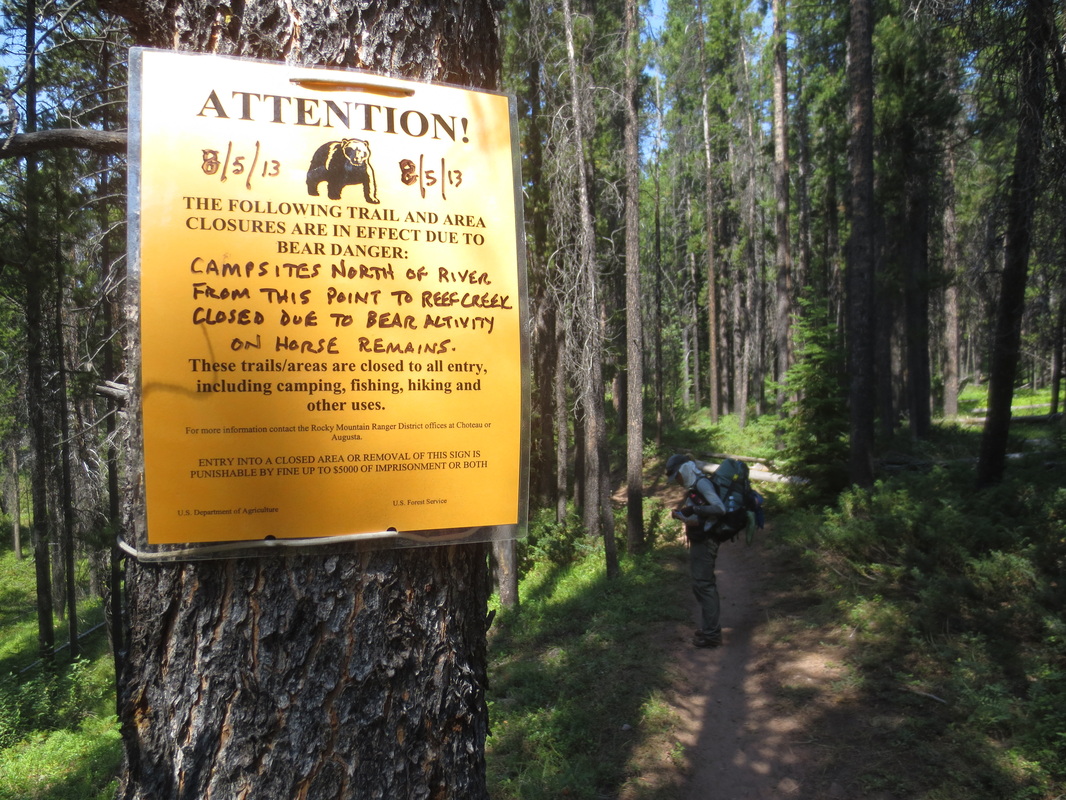 What the sign isn't telling us - the horse was blown up! 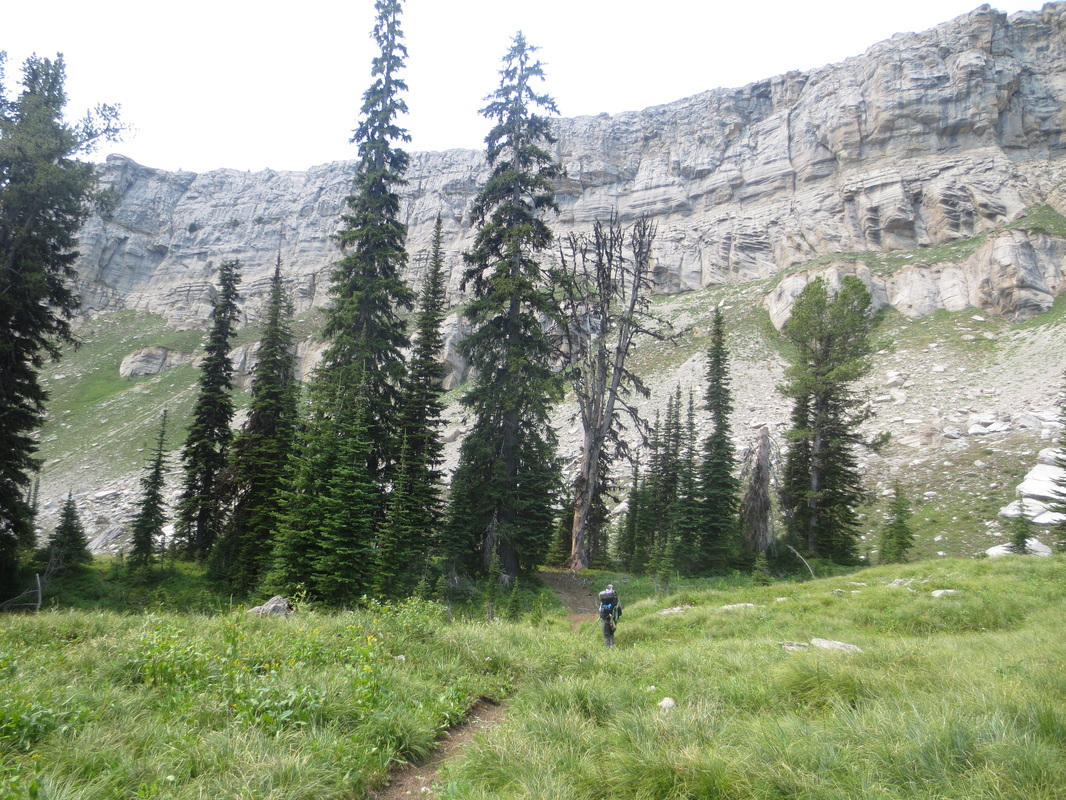 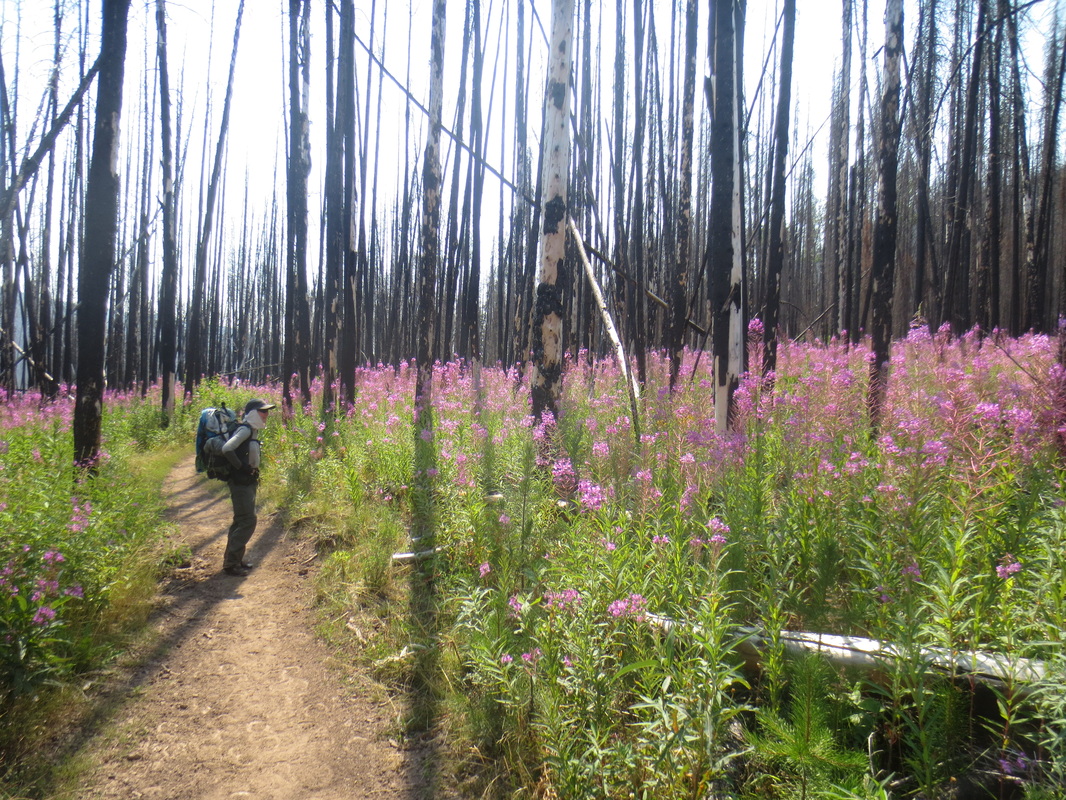