2020
In October 2019 Mike and I drove to Arizona where I began a six-month volunteer position at Lost Dutchman State Park.  In exchange for working 25 hours per week, I was provided a private electric/water campsite within the park where I setup my tiny house - our campervan.  The 320-acre park, which is about 40 miles east of Phoenix, provides hiking trails and 138 campsites.  My job was to greet people at the entrance station/gift shop and assist them with obtaining their day use hiking passes, check them into their campsites or sell them items from the gift shop.

Why did I want to be there?  It is a special experience to live within a beautiful, quiet desert paradise for six months.  The park adjoins the Superstition Mountains so there was plenty of great hiking right out my van door.  And the weather - warm and pleasant.  A bonus - I made many new friends from the staff and volunteers working in the park.

Lost Dutchman is an immensely popular winter destination for people from the northern states, Canada and Europe.  To guaranty a campsite within the park, many travelers pay for their reservation a year in advance.  As the pandemic developed activity within the park went from the usual snowbird-business to crazy because Arizona State Parks never closed!  European travelers and Canadians left once they became concerned about being allowed to return to their countries, but as national and state parks closed in the U.S., campers from those parks were clamoring to obtain a reservation at ours.  We also saw a HUGE increase in day hiking as schools, restaurants, movie theaters, etc. closed.  Many day hikers waited in exceedingly long lines for an open parking space.

So, in my Covid-19 experience there was no social isolation!  The opposite! 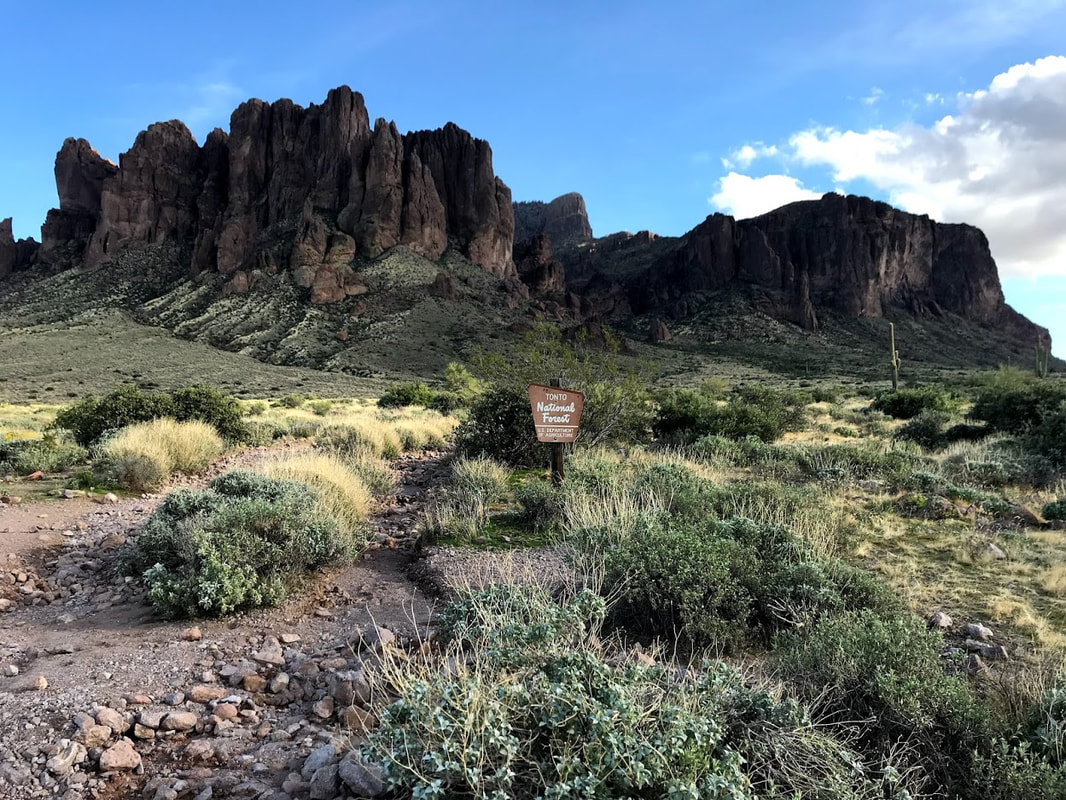 Looking at the Superstition Mountains from the park
Mike, on the other hand, had a different experience.  After he flew home from Arizona, he began his 13th season of teaching skiing at Loveland Ski Area.  All was going great until March when Governor Polis closed all of the ski resorts because of the Coronavirus.  A highlight of Mike's short season was that he passed the ski portion of the level three PSIA ski certification.  No easy feat!

Like many during the pandemic, Mike was stuck in our house as everything shut down and near panic set in.  We discussed whether he should join me Arizona but decided against it since the world was in Covid-flux.  So, he stayed in Colorado until the beginning of May when my volunteer position ended, and then flew to Arizona to help me drive back home. 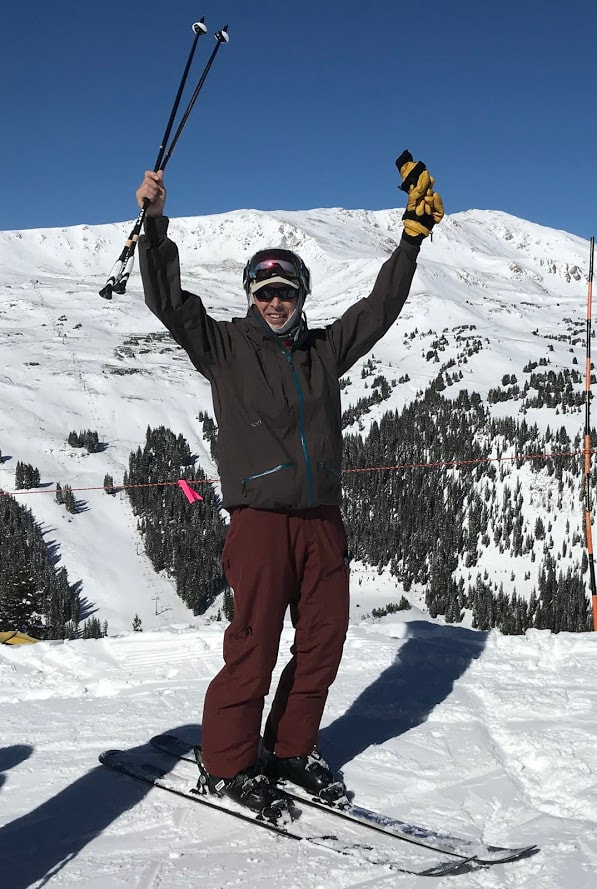 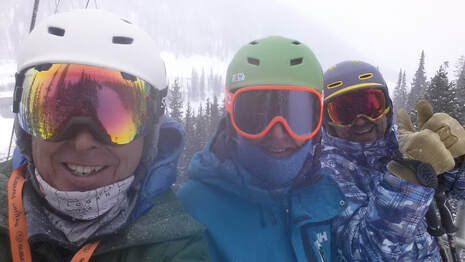 Skiing with other instructors named Mike
In the summer we decided to head out of Dodge and hike the Colorado Trail for the third time.  From July 5 to August 2 we walked from Waterton Canyon near Denver to the Eddiesville Trailhead near Creede.  We completed 330 miles or 68% of the trail.  We had full intentions to hike the entire 485 miles, but Mike developed severe feet pain.  At the end of August Mike had surgery in which a large bone spur was removed from his left foot, and on this right foot a cyst was drained and an arthritic joint was rebuilt. 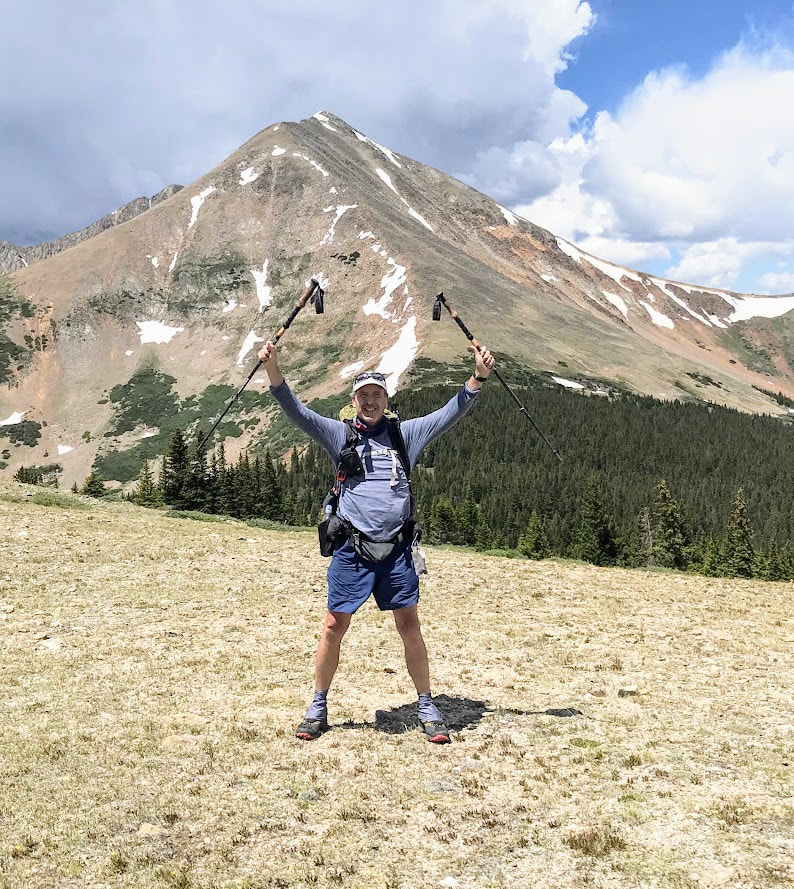 CT: Georgia Pass with Mount Guyot in the background. Not far from Breckinridge. 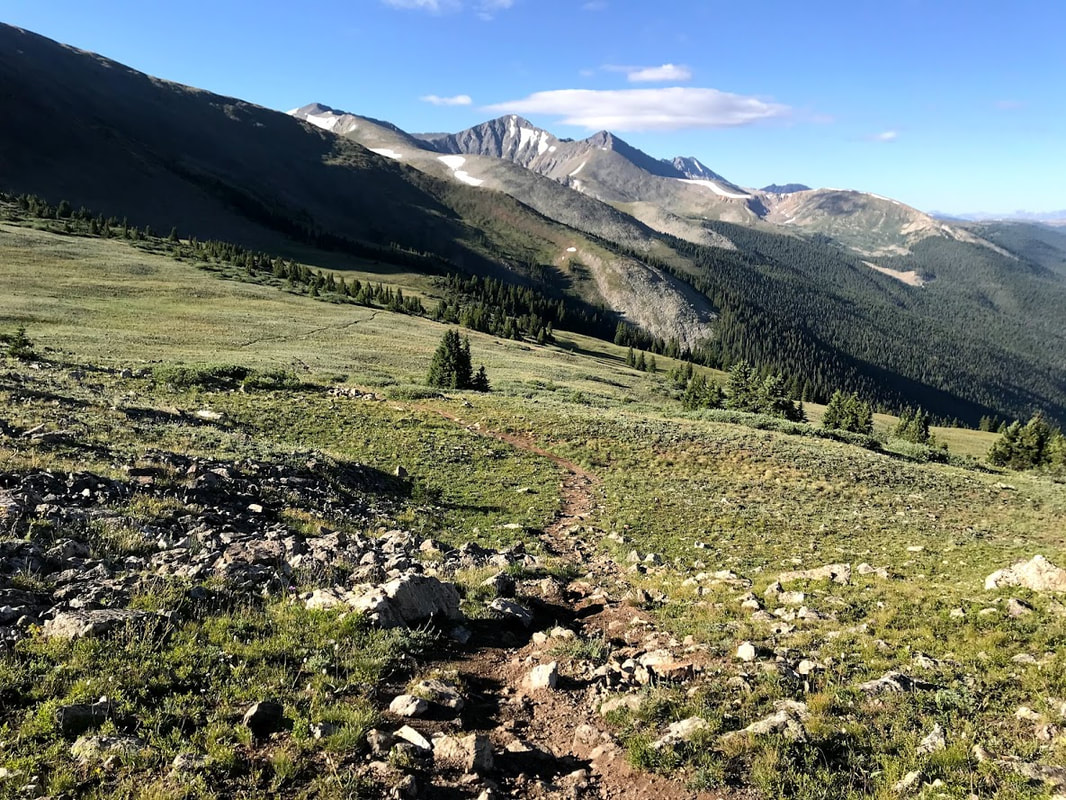 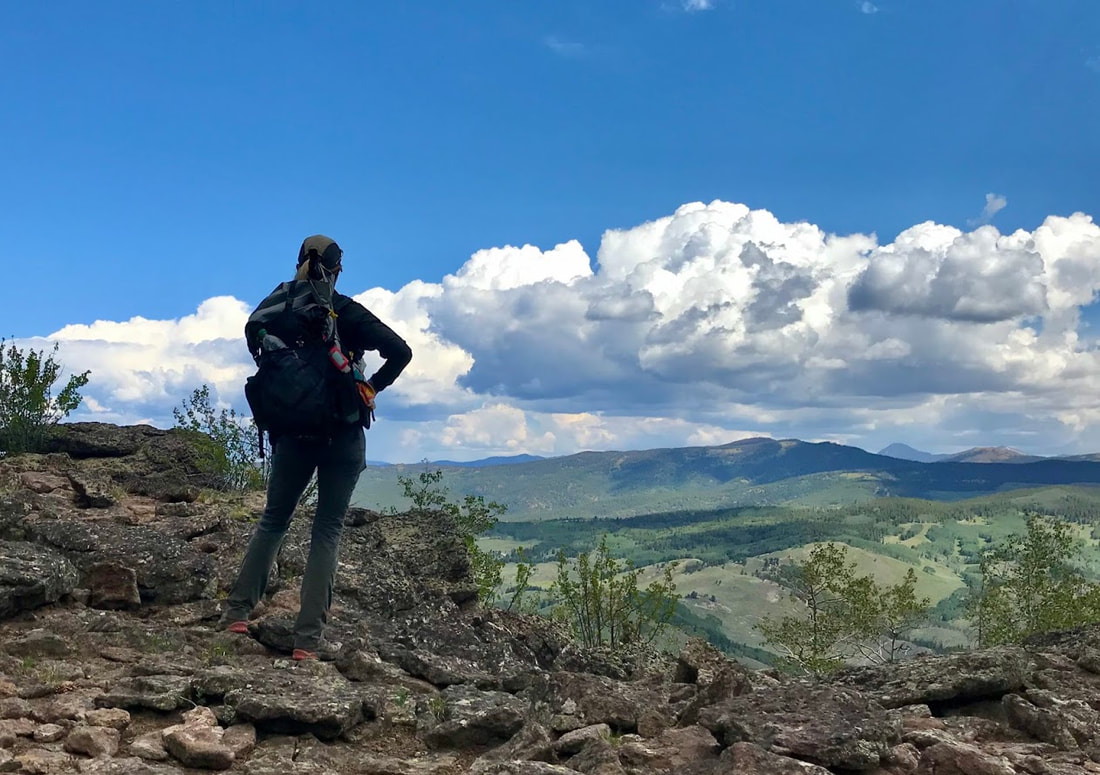 CT: Admiring the isolated Cochetopa Hills about 285 miles from Denver
Mike's surgery went well.  He is back to teaching skiing at Loveland Ski Area for the 2020-2021 season.

I decided to stay in Colorado during Lost Dutchman's 2020-2021 snowbird season to steer clear of Covid-19.  Assuming we put the virus in our rear-view mirror, I plan to return to Arizona in the winter of 2021. 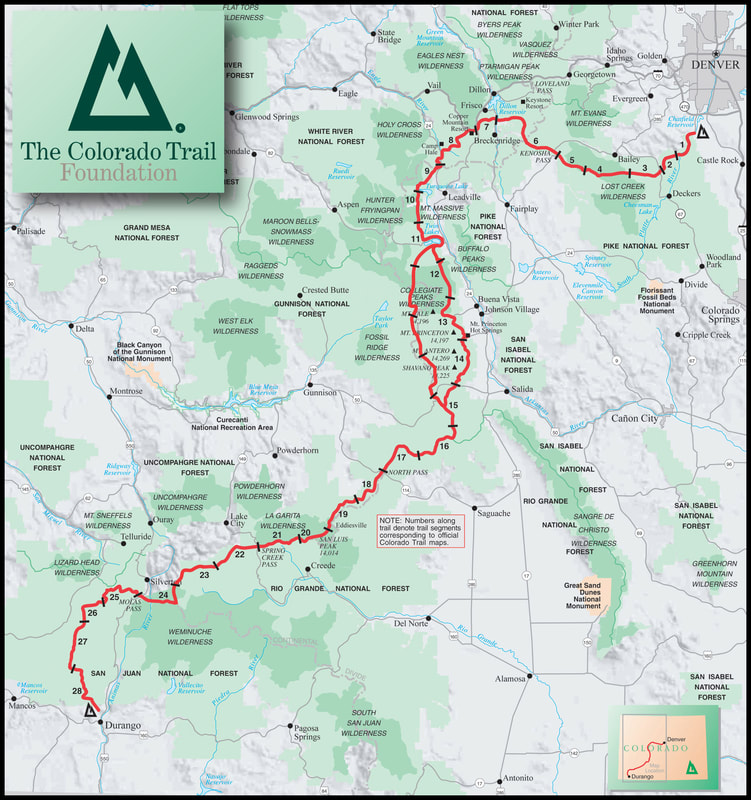 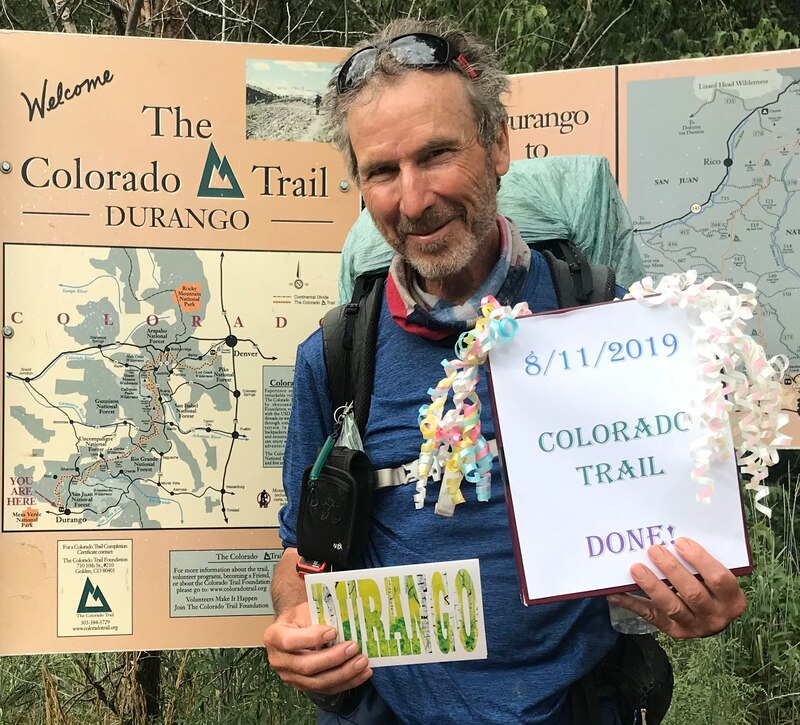 The words that best capture Mike's goal to hike the entire Colorado Trail (CT) this season were clearly "dogged persistence"!

Mike began his journey on July 4 from the northern terminus at Waterton Canyon (south of Denver).  After backpacking for seven days, sometimes through deep snow, life stepped in.   On July 10, I picked him up at the Camp Hale TH near Leadville and drove him directly to our dentist's office near Denver because he had a toothache.  It turned out he needed a root canal.

After recovering from the root canal procedure we returned to the trail on July 16. This time I went with him and met him at trail/road access points with our campervan.  With my support he could day hike many segments of the trail and enjoy a hot meal, shower and soft bed at the end of the day. After hiking for four days we discovered that the van's solar panel had been destroyed from hail.  What did that mean?  The fully stocked refrigerator no longer had power.  Back home to Castle Pines we went.

Once home, Mike studied everything he could find on the internet concerning solar panels, ordered the necessary parts and replaced the panel.  Eight days later we returned to the trail at the Clear Creek TH (between Leadville and Buena Vista).

Mike was able to stay on the trail from July 28 through August 11 through a series of backpacks and campervan-supported day hikes.  I wasn't as lucky. Towards the end of his trek I had to go home, once more, because our van conked out climbing a hot, steep grade north of Durango.  I returned in time to celebrate with Mike as he completed the trail at the southern terminus in Durango on August 11.  Woo hoo!

Mike hiked the CT from Waterton Canyon to Durango over 25 days and was off trail for 13.  On his last day he hiked 28 miles, much of it in the rain and slippery mud!  The power of the finish line!  Or was it me?!

Mike's takeaways from his trek:
In 2012, an 83.2 mile section called the Collegiate West (CW) was added to the CT.  Hikers have a choice when they arrive in the Buena Vista area - hike the original Collegiate East (CE) route, the newer CW section or the entire loop.  Mike chose the CE because of the lingering, deep snowfields covering the CW.  Since most of the CW is between 10,000 and 12,500 feet, this year's above-normal snowfall left much of the CW covered late into the hiking season.

Not to be denied, Mike and I returned to the mountains in September and backpacked the CW route from the eighth through the 13th.  What we discovered was that it was a tad late in the season to do this. It was very cold at night!  My "pajamas" consisted of two pairs of wool socks, my 800-fill goose down jacket wrapped around my double-socked covered feet, long johns, hiking pants, rain pants, a hiking shirt, a fleece hoody, a rain jacket, a wool beanie and both jacket hoods pulled up over my wool beanie.  Did I mention that my Michelin man body was then wrapped inside a 20-degree down sleeping bag with a small breathing hole?  Imagine a fat mummy (wrapped in down, not bandages).  All of that and the best I can say as that I was kinda-sorta warm!

Luckily, the daytime temperatures were very pleasant with little rain, there were no mosquitoes and much of the CW had stunning views.  We will have to return when we can sleep in our shorts on top of our sleeping bags.

Our winter adventures?  Mike will return to Loveland Ski Area for his 13th year of teaching skiing. I will be an onsite volunteer at Lost Dutchman State Park, about 40 miles east of Phoenix, AZ, from October into May 2020.
​
A few photos from Mike's through-hike and our CW backpack are below but more photos may be found under the CT- 2019 tab above. 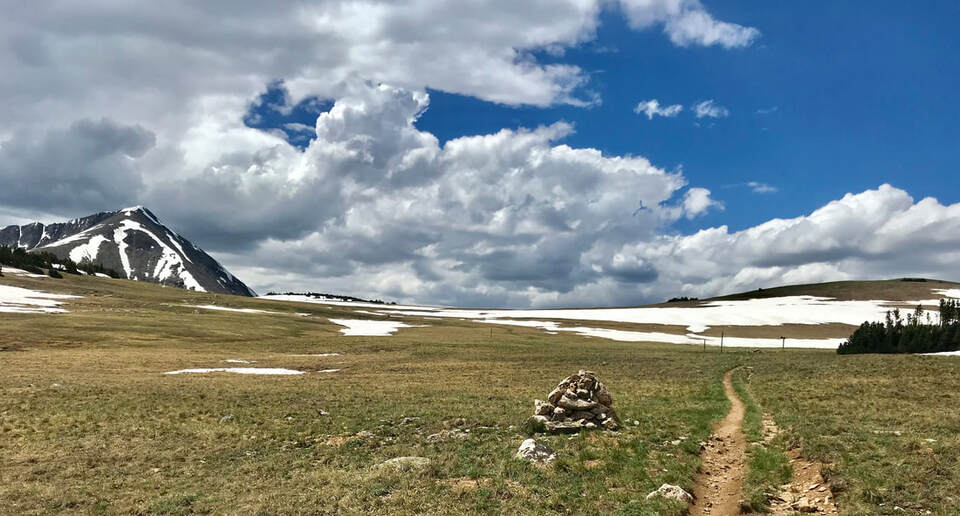 CT: Georgia Pass on Segment #6 on July 7. Much of the trail was still covered in snow.

CT: On the trail on Segment #23 in the mountains between Silverton and Lake City. This is one of the most remote segments of the entire CT. 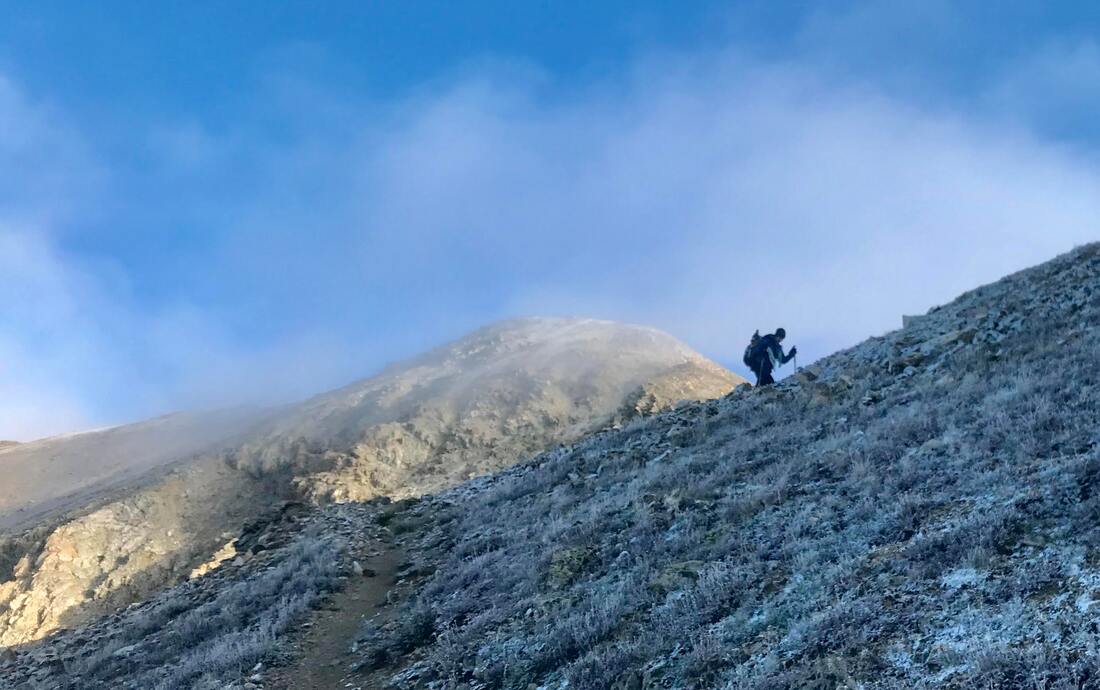 CT: Almost at Lake Ann Pass at 12,588 feet on the CW. Yes, that is a dusting of snow! My water bottle started to freeze as we approached the saddle.
2018 - The Pacific Crest Trail - Done!
On August 17, 2018 Mike finished hiking the entire Pacific Crest Trail (PCT) - a 2,650 mile, multi-year adventure! He began walking north from Elk Lake TH in OR on July 9 and ended at the Canadian border about six weeks later.  As in previous years, I was able to hike much of trail while supporting him with the help of our off-road campervan.

The biggest challenge this season was the horrible air quality. For several weeks of our trip numerous large forest fires throughout the Pacific Northwest created hazy, almost claustrophobic skies.  Beautiful vistas were infrequent.  Many days it smelled like we were sitting in a fireplace.  Very unpleasant!  More then one hiker had told us that WA was their favorite part of the PCT, but unfortunately the inability to breathe well or see far diminished our experience.  That said, we occasionally had glimpses of the area's beauty and have captured some of them in the PCT Photos tab above. 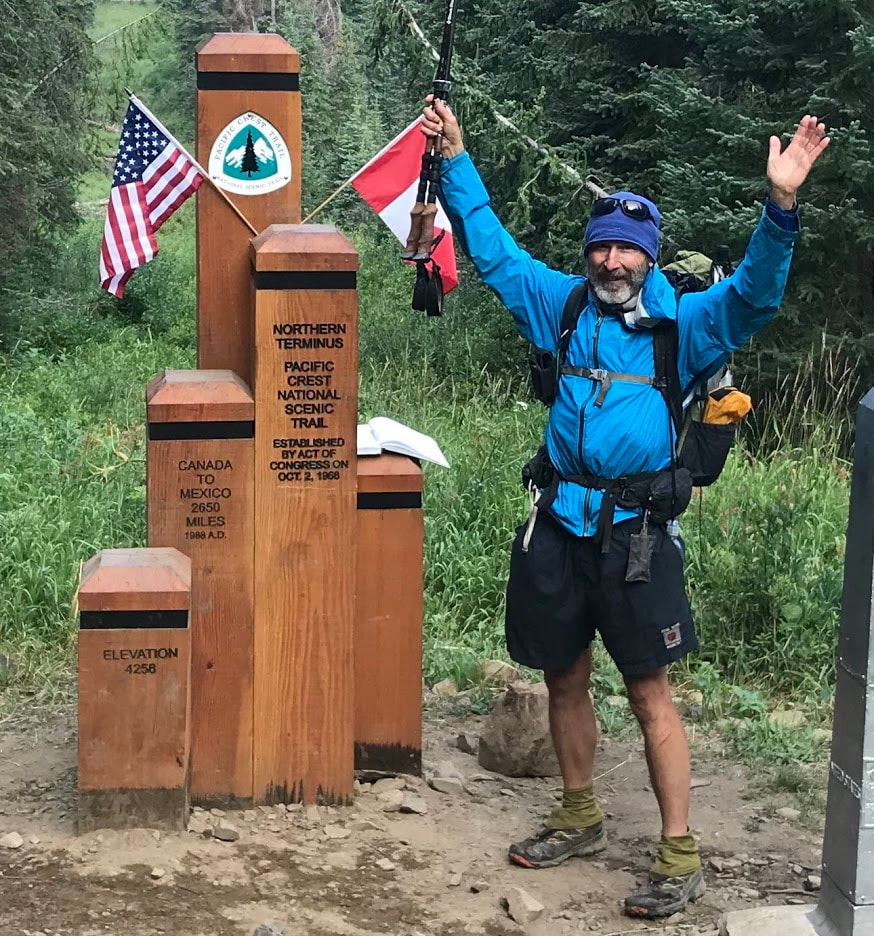 Mike was hoping to finish hiking the 2,650-mile Pacific Crest Trail (PCT) in 2017 but his body had a different idea!  In 2015 and 2016, he trekked from the southern terminus in Campo, CA, north to near Shasta, CA.  In 2017, he resumed the march north starting near Shasta, CA and ending at Elk Lake, west of Bend, OR.  He had been feeling pain in his side for most of the trip and, lo and behold, a doctor in Bend confirmed he had a hernia.  Unfortunately, this was a PCT season-ender. We returned to CO and Mike had it surgically repaired.

My role had been to provide Mike with trail support.  After resupplying with food, gas, water, and sometimes gear, I drove our 4 x 4 campervan north of Mike's location to a predetermined trail/road access point.  Assuming he was not on a multi-day backpack, I would hike south and meet him on the trail and then together we walk north to the van.  At the van we refreshed with outdoor showers, cooked dinner, charged devices and slept on a comfortable bed.  Because it has solar panels that power most of the "house" functions such as our refrigerator/freezer, we could be in the boondocks and enjoy ice cream!  Who says you have to rough it!

​We refused to allow Mike's surgery stop our summer adventures.  While Mike was healing we flipped roles.  Over 35 days I hiked the 485-mile Colorado Trail (CT) from southwest Denver to Durango, CO and Mike supported me.  Thanks to his ability to negotiate some white knuckle four-wheel drive roads, I never slept in my tent!  I day-hiked every segment of the trail and relaxed each night in our off-road vehicle.

​A few pictures from the two trails are highlighted below but for more click on PCT Photos and for a slideshow of my thru-hike see the CT-2017 tab above. ​​

PCT: Forester Pass in the Sierra Nevada Mountains. The highest point on the PCT. 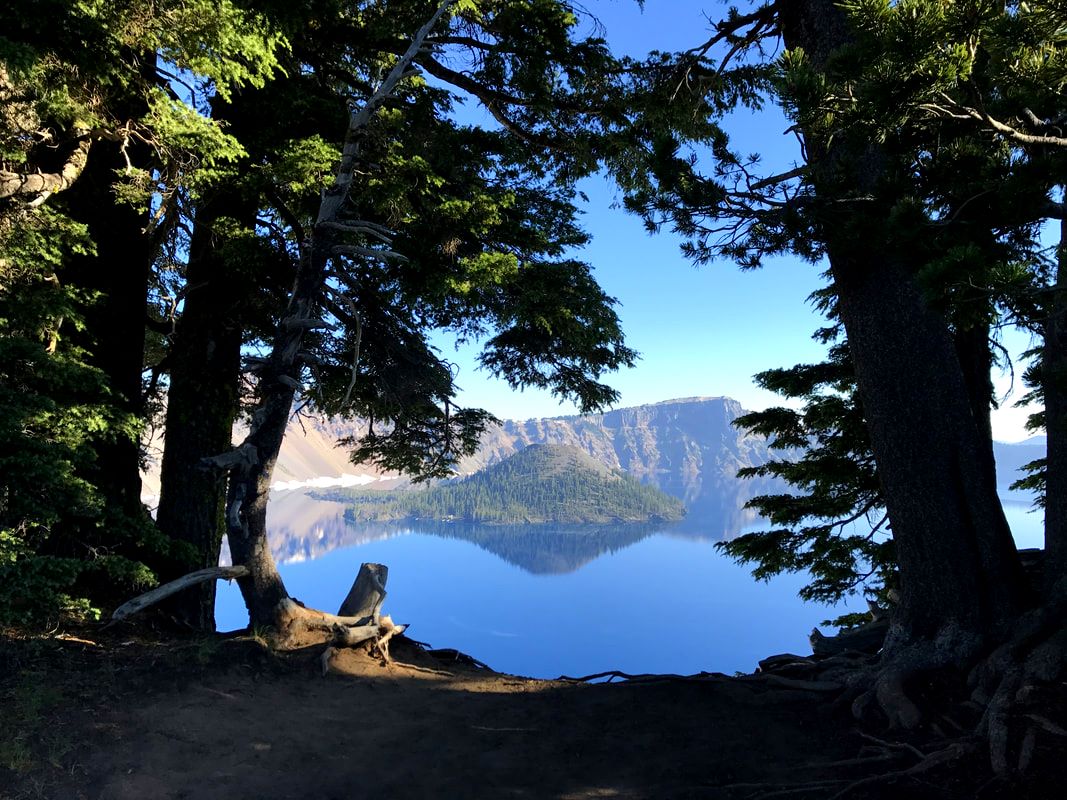 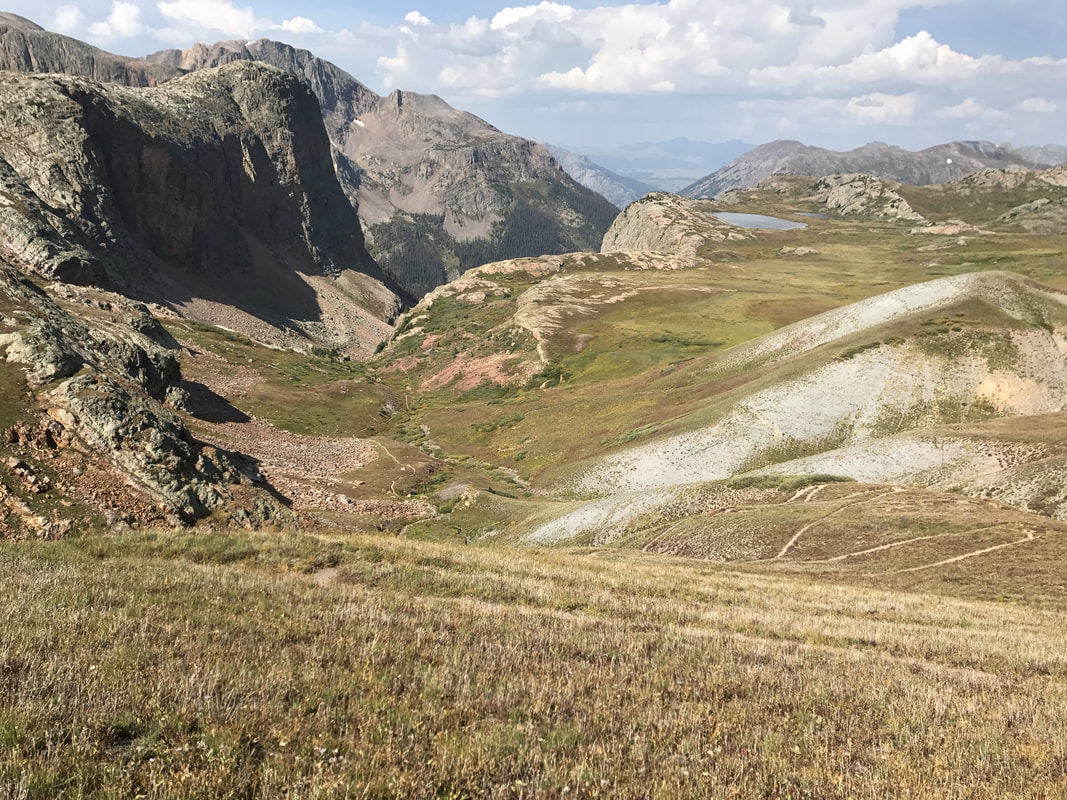 CT: Headwaters of Elk Creek in the Grenadier Range 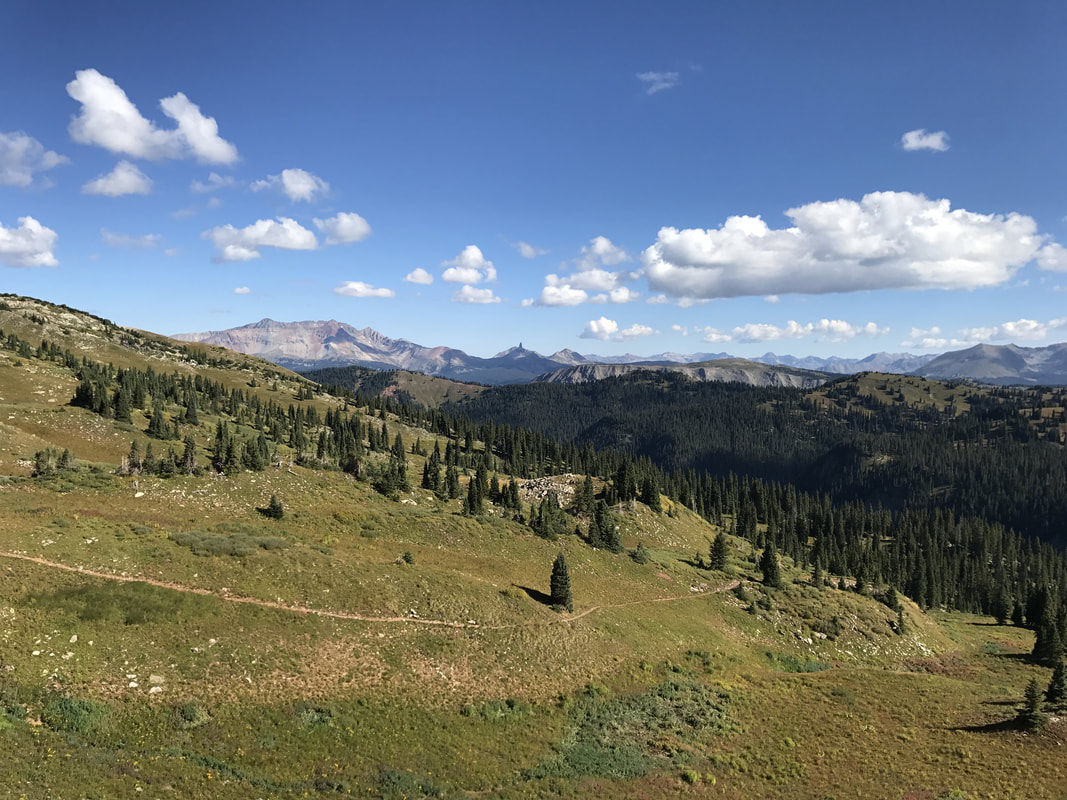 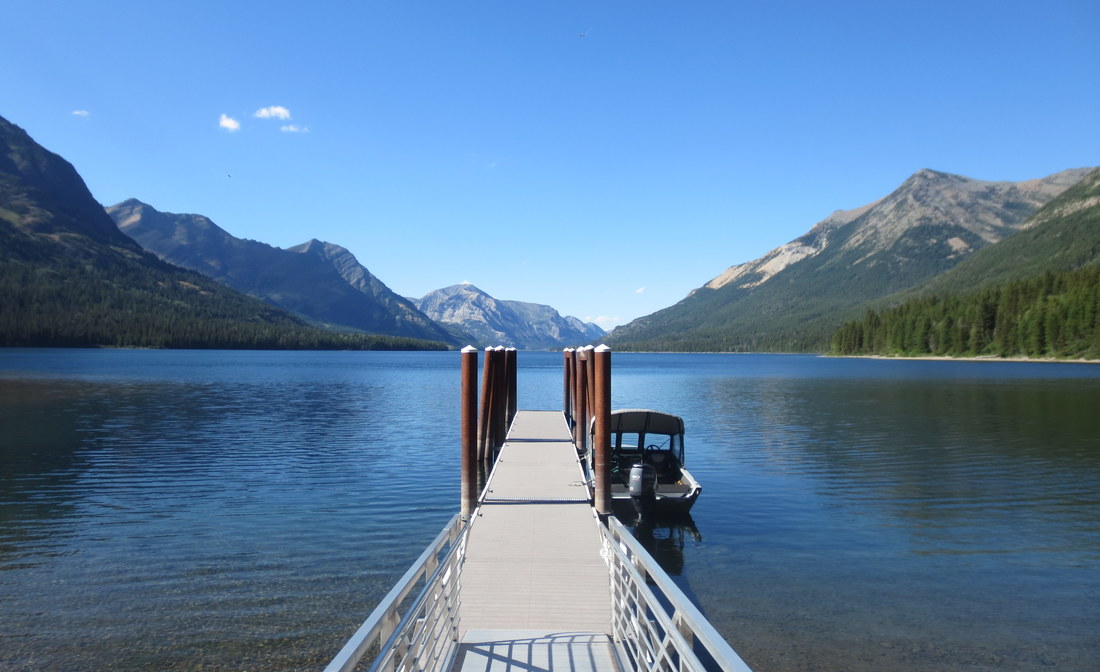 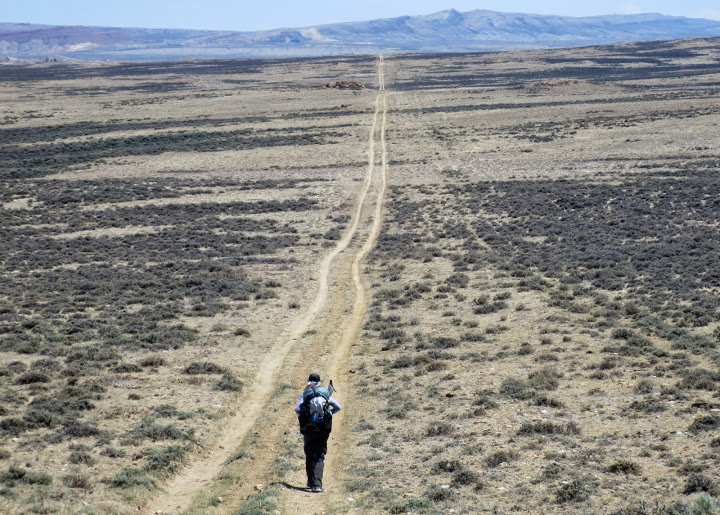 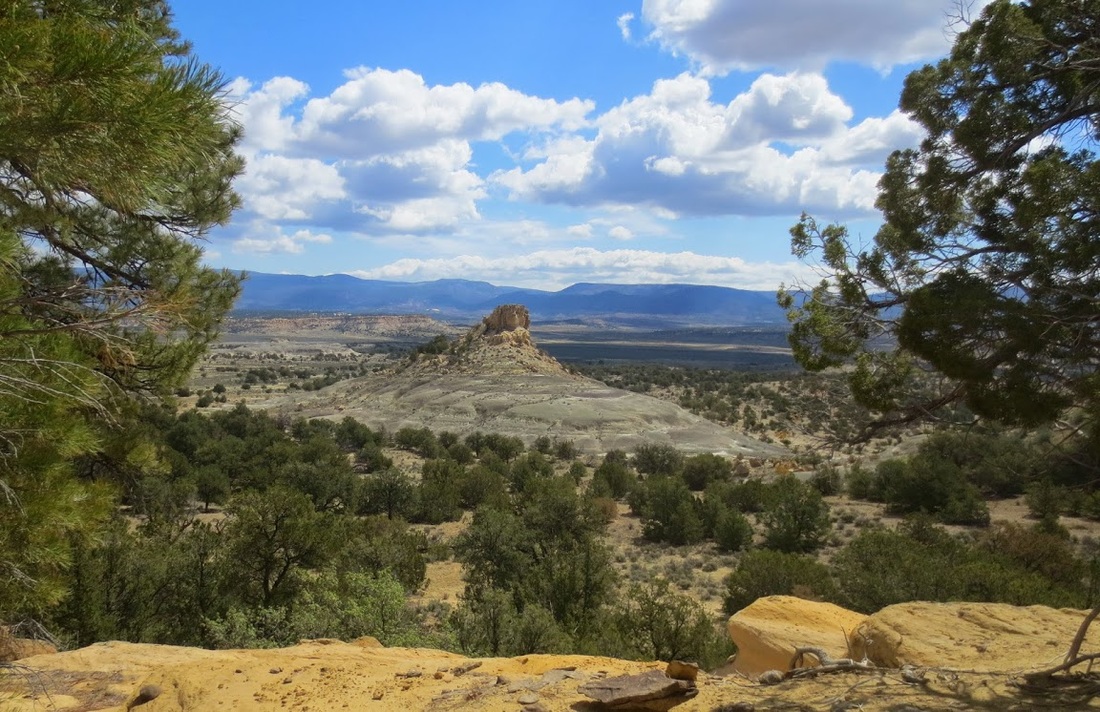 CDT: near Navajo Nation in NM
Powered by